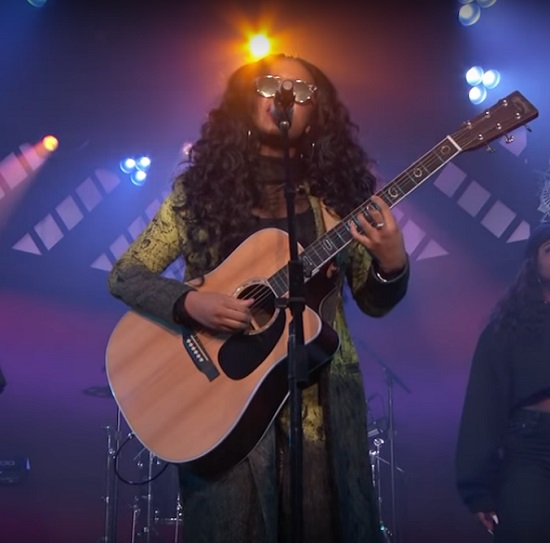 Is it just us or is H.E.R. letting her light shine extra bright these days? The once-mysterious singer is all over the place — from high-profile concert tours to award shows to major festivals. Oh, and there's also late-night television. Having already set the stage ablaze on The Tonight Show Starring Jimmy Fallon with her track "As I Am." She continued her late-night conquest with an appearance on Jimmy Kimmel Live!, this time bringing out her track "Fate" for the occasion.

The song — which is a bit of a downer as it focuses on atoning for one's sins and the blues of paying dues — is an interesting choice for late night. Still, she made it work for her. Dressed in her signature shades, flowing curls and a colorful overcoat, she and her backing singers delivered the sensitive sentiments of the song with conviction. Even better, H.E.R. acknowledged the musical similarities between her track and Michael Jackson's "Earth Song" by incorporating it into her performance (yes, even the climactic chorus of "What about us?" that takes the song to gospel heights). She then brought it back to her own song, ending on a quiet note and leaving both the audience in studio at home in awe.

H.E.R. brought the thunder with this one and we hear she's doing the same on her I Used To Know HER Tour, which next rolls into Brooklyn on November 25th. Check out her performance of "Fate" below and make sure to cop a ticket or two to a show near you.