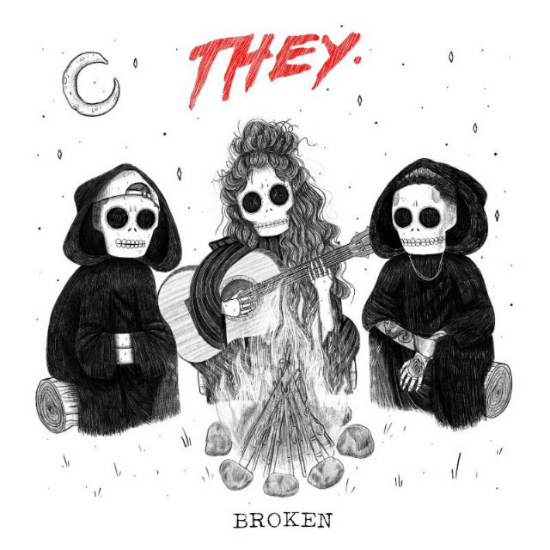 The men behind hits for Jeremih, Kelly Clarkson and others, THEY. are coming on strong for their upcoming EP, Fireside. The duo, composed of members Drew Love and Dante Jones, already got things off to a rocking start with the banger “What I Know Now" featuring Wiz Khalifa. Now the production duo has teamed up with Canadian import Jessie Reyez for the ballad “Broken,” a song about trying to pick up the pieces following a breakup. While the song might be about things falling apart, the trio comes together to create an intriguing track.

Over a somber guitar lick supported by subtle drums and bass, Reyez and THEY.’s Drew Love trade verses about trying to love with a broken heart. On the first verse, Reyez is reeling from a breakup, trying to find answers to why everything fell apart, singing, "Fall in love again / Fuck it up again / This is the effect that I got.” Drew chimes in on the second verse, trying to manage a relationship with someone who hasn't healed from their last one: "We fall in love / I do the most / You question it all ‘cause you’re still broken.” While simple, there’s a deeper meaning and experience behind the lyrics. They’re trying to figure out what happened in their last relationship so that they can move on (and do better the next time around). What did they do wrong? What’s wrong with them? Who can they blame to feel better about themselves? They are full of all of the questions people ask themselves in the aftermath of a relationship.

THEY.’s EP Fireside is due for release on November 9th. The project promises to feature additional collaborations with Ty Dolla $ign, Gallant and more. This will be the follow up to their debut album, Nü Religion: HYENA. Meanwhile, Jessie Reyez released her EP, Being Human Public, last month. You can hear all three make beautiful music together by hitting play below.