Ariana Grande Gives Us Something To ‘Imagine’ On ‘The Tonight Show’ 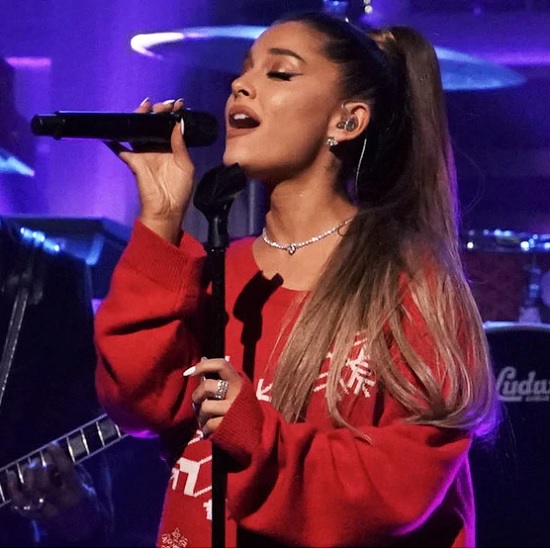 Ariana Grande has had a year marked by personal tragedy and career triumph, a fact that has not been lost on her. Still, the young chanteuse soldiers on as she prepares to release her as-yet-untitled new album (her second in a year). Helping in the promotional push of that set's newest single "Imagine," Ariana decided to take over The Tonight Show Starring Jimmy Fallon and stop the show with a stellar live rendition of the track.

"Imagine" is a slow sultry R&B number on which the pop star pictures a world in which she and her lover can be alone together, safe from the public's prying eyes. She painted that vision quite well for the audience as she belted the sensual number while backed by The Roots. She took to the stage draped in just an oversized holiday sweater and thigh-high black boots, her signature ponytail hanging past her shoulders. As she sang the lyrics, her eyes closed for a good part of the performance, we couldn't help but wonder if maybe she was thinking of one of the exes she name-checked in "thank u, next." Either way, she definitely proved why her brand of pop brings the masses to the yard and even why the Mariah Carey comparisons just might be valid.

We'll let you be the judge on that last part when you check out Ariana flexing her vocal skills while performing "Imagine" below.