Chloe x Halle Bring The House ‘Down’ On ‘The Tonight Show’ 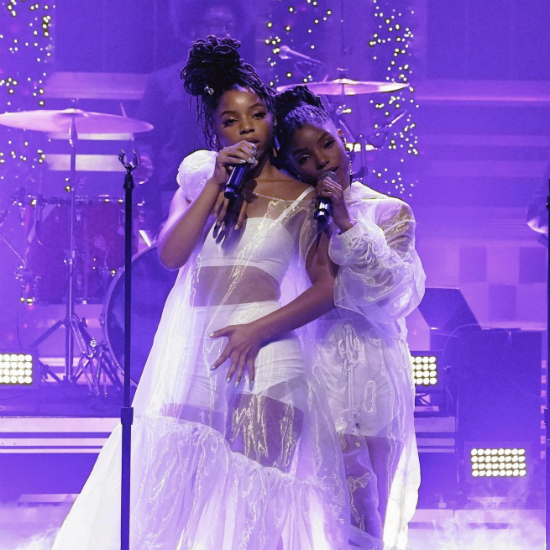 To say that Chloe x Halle have had an incredible 2018 would be an understatement. Beyoncé’s protégés released their debut album The Kids Are Alright to rave reviews, co-starred on the hit comedy grown-ish and were nominated for not one but two GRAMMY Awards. Not bad for anyone, but it seems like slight work for these talented, hard-working divas in training. But if there’s any question about whether they earned their stripes or are riding coattails, you can get all the evidence you need from their The Tonight Show Starring Jimmy Fallon performance of their song “Down.”

Backed by The Roots, Chloe x Halle serenaded the audience with their upbeat single. Dressed in all white like casually chic angels, the performance started with the Bailey sisters giving a few operatic vocals to set the mood before diving into their impressive harmonies. In addition to singing, the ladies also gave us a few choreographed moves, body rolls and some snapping and twisting. For a song about taking things slow and doing some self-care, Chloe x Halle didn't give us a minute of rest during their performance, keeping us engaged with their killer stage presence the whole time.

While some might say the girls were doing a little too much, we're not the least bit mad. If we were nominated for our first GRAMMYs, we’d probably be showing up and showing out, too. Here’s hoping Chloe x Halle have an equally impressive 2019 and bring home the win.