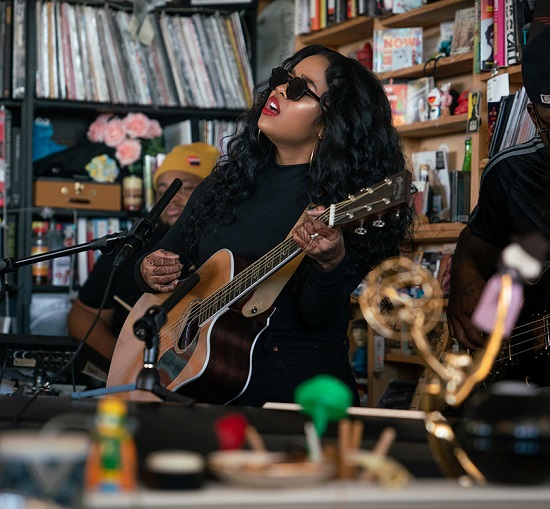 We were already fans of H.E.R., but the singer-songwriter has truly come into her own in 2018. Following up on the success of her self-titled debut (a compilation of material from her previous EPs), she's dropped two of the best R&B projects of the year with I Used To Know Her: The Prelude and I Used To Know Her: Part 2. While hitting the road for her latest headlining tour, she also made time to stop by the NPR studios to join the number of artists who have performed for their Tiny Desk Concert Series.

Rocking her signature shades and flowing, wavy locks, H.E.R. kicked off the set with the interlude "Going," which can be found our her latest effort. Her soft guitar playing accompanied by the jazzy piano melody was a perfect way to ease the audience into her vibe. That was soon followed by her band launching into The Prelude's moody "Feel A Way." She lingered there for a bit, allowing the smooth joint about getting pissed off to go different places, including an interpolation of Michael Jackson's "Butterflies" with the backing vocalists. Then they jumped back to Part 2 with "Hard Place," the beautiful ballad featuring H.E.R.'s skill on the acoustic guitar. After brief band introductions from her backing vocalists, she concluded her set by reaching back to her beginnings for her final song, H.E.R., Vol. 1's "Focus." The tender ballad about needing her lover's attention is always made more interesting by the singer's shunning of any focus on her life outside of her art. However, during this particular performance, a smile actually parted her red lips and it almost looked as if she would remove her shades as they picked up the tempo. Of course, that didn't happen, but it was enough of a groove that it didn't really matter anyway.

With five GRAMMY nods under her belt, musical chops that go far beyond what passes for the norm these days and a debut finally on the way, it's safe to say that H.E.R. is perhaps one of the best things to hit R&B in a while. But don't take our word for it, watch H.E.R. work her magic during her Tiny Desk performance below.


TAGS:  H.E.R., michael jackson, Tiny Desk Concert Series
Previous: Durand Jones & The Indications Pour Their Hearts Out On ‘Don’t You Know’ Next: Taliwhoah Is Going Through A ‘Love Cycle’