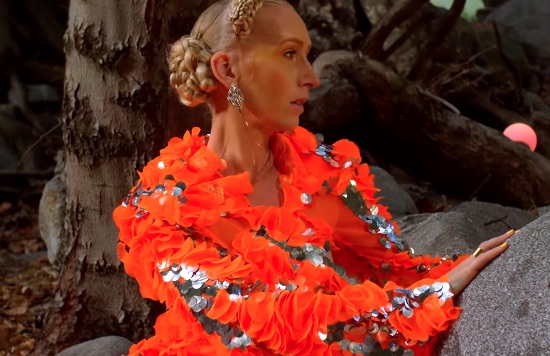 Singer/songwriter Nanna.B is an artist in every sense of the word. Her creativity and visual artistry background come shining through in everything from her music to her cover art and music videos. As a follow-up to her EP Lapis released back in May, the Danish enchantress recently dropped a full project entitled Solen. Much like her visual interpretations, the album is a seamless blend of moods and genres, resulting in a fluid and layered sonic experience.

The project’s lead single "Magnetars," produced by master innovator Iman Omari, gave us only a hint of the type of groovy, genre-bending goodness the full album would bring. Shortly before its release, Nanna dropped the certified jam “Find U,” produced by a virtual dream team of hitmakers including Cohenbeats, Shafiq Husayn and Anderson .Paak, along with its accompanying visual.  The video opens with Nanna turning a blank canvas into a blue-hued masterpiece while her Shafiq Husayn-produced track “Indigo” plays in the background. Viewers are then transported to the middle of the wilderness, where our siren is adorned in a tangerine ensemble fit for a goddess. She makes her way through the forest, placing several glowing crystal balls on various points of darkness, before arriving at the mountaintop just as the sun sets. The M4RZ-directed visual aligns perfectly with the stand-out track that tells the tale of resilient love.

Other highlights of the album include the tranquil MNDSGN-produced track “Beaches” and the soothing “Live Love Life” produced by Astronote. Overall, with its sonically savory texture and its exquisitely arranged vocals and instrumentation, the entire project feels like a warm breeze coupled with a much-needed cleansing exhale. After uprooting and making Los Angeles her second home, it seems Nanna has truly found her creative comfort zone. There’s a confidence that’s readily apparent in the album, despite its complex composition. She refers to her creative collaborators as “friends and family,” which could explain the project’s cozy energy. She says, “The album is produced almost entirely by friends and family that I have met on my travels to L.A. and finally both Iman Omari and Anderson .Paak helped me pick out and wrap up the songs for the final outcome. Working on each song opened up new relationships for me.”

Watch Nanna.B’s video for “Find U” below and be sure to add her new album Solen to your collection from your favorite digital platform. L.A. Bouncers can grab tickets to catch her at The Hi Hat on December 18th as part of Airplane Mode, alongside Free the Robots, Iliagorovitz and (Thee) Mike B.