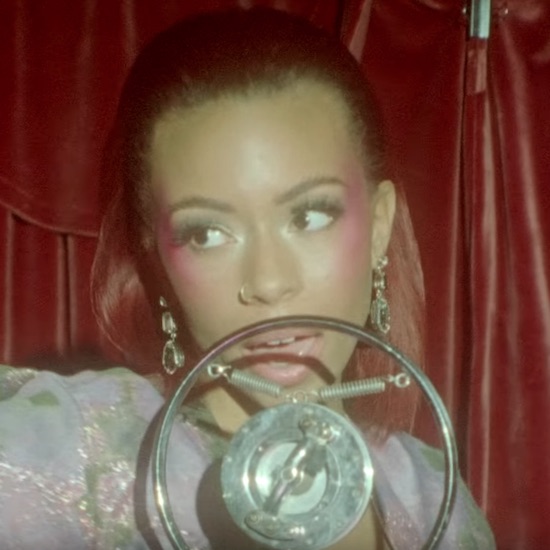 Nineteen-year-old Ravyn Lenae may be young, but the old school influence is heavy with this one. After wowing us with her Crush EP earlier this year, she's been dropping off some videos that play more like a blast from the past. After journeying to the disco era of the '70s with "Sticky" and then making a pitstop in the '50s with "4 Leaf Clover," she heads back to the discotheque in the clip for her new single "The Night Song."

In the Weird Life-directed video, Lenae is a vision dipped in the warm, sparkly glow of the disco era as she sings coyly from a stage. Interspersed with her performance footage are an array of scenes ranging from audience members who are inspired to get a little closer to a drag queen getting dressed backstage.

As inviting as the visuals are to watch, it's Lenae's angelic vocals that steal the show. Her voice is crystal clear as she sings about living life to the fullest and loving herself. "People like to stare / I don't really care what you think / Oo, I like my hair today / I look to the clouds, and they waving hey," she sings sweetly over a funky bassline. As with the other songs from Crush, "The Night Song" was produced by The Internet's Steve Lacy, who in the past has described his relationship with Lenae as his " Pharrell/Kelis, my Timbaland/Aaliyah, my J*Davey moment.”

Thus far, we can say without a doubt that this musical partnership has been music to our ears in more ways than one. Take a trip back in time with Lenae's latest and be sure to check out the magic between Lenae and Lacy on her latest EP, Crush.