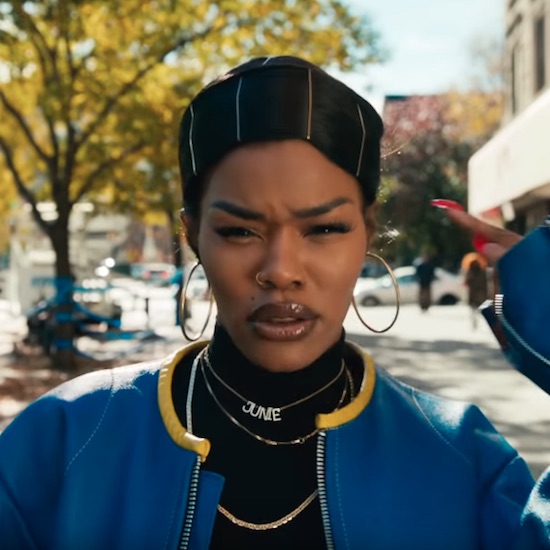 While we wished, hoped and prayed that Teyana Taylor would make a video for the remix to her single “Gonna Love Me” featuring Ghostface Killah, Method Man and Raekwon the Chef, we didn't really think one would happen. But Junie’s Momma is always full of surprises. Mrs. Shumpert not only dropped a video for the "Gonna Love Me (Remix), but she's taken our expectations, thrown them out the window and delivered a stunning visual that captures the nostalgia of the era when Wu-Tang Clan wasn’t nuthin’ to f**k with.

While the original video paid homage to Teyana’s friends and family supporting her on her grind, the remix clip pays homage to ‘90s New York City hood love stories. The locations, fashions and even the acting will put you squarely in that time period. The video starts with Teyana discovering evidence of Ghostface cheating and creating an argument. She leaves the apartment wearing a bomber jacket and with her doobie perfectly wrapped, walking down the street whispering about sweet love. Later, Meth delivers his verses in a scene with Teyana that finds its inspiration from his classic video for "All I Need" with Mary J. Blige. Although Ghostface and Meth are present and representing, Raekwon is noticeably missing from the video, but his verse is played during a party scene where things come to a head between Ghost and Teyana.

Directed by Teyana herself, “Gonna Love Me” is an excellent video that perfectly captures the vibe of ‘90s hip-hop. The clip highlights trends from that era but doesn’t flat out steal them as much as reimagines them. Let Teyana and the Wu take you back in the day today when you press play.