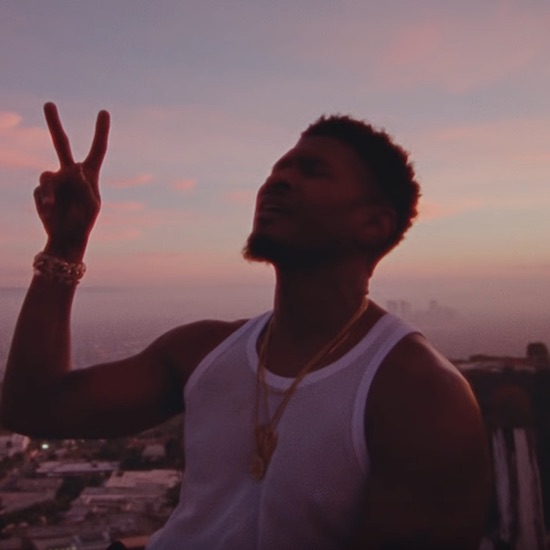 With all this talk about who the "King Of R&B" is, many have thrown Usher's name into the running, which is fair given his 24 years in the game. However, the reaction to Usher's "A", his joint album with producer Zaytoven, has been pretty mixed everywhere, especially here at SBHQ. There are a few songs on the project that some of us (*cough* Butta *cough*) can't get enough of, though. One such song is the freaky groove Ursh coyly titled "Peace Sign." While it sounds innocent enough, it's anything but as he's referencing the position that a woman's legs are in when things are *ahem* going down. Now the song has the honor of being the first visual that Usher has released from the surprise set.

The video for "Peace Sign" doesn't delve too far into explicit territory, as it's more of a love letter to late nights. It's shot with a slightly grainy quality that somehow gives things a gritty feel and filled with neon lights and rain-slicked streets as Ursh speeds around Los Angeles in his fly blue whip. And since this is Usher, he of course has to show love to his hometown of Atlanta. He showcases ATL's scene as well in the clip — complete with a stop at one of the city's many strip clubs. The video more than meets its quota of a**es jigglin' and wigglin' by paying a visit to Peaches Of Atlanta, a popular shake shack in the A where a gentleman can go to see ample assets, if you catch our drift. We also get to see what happens after the club, with Usher spending a significant amount of time crooning in the red booth of an all-night diner (which is also where producer Zaytoven decides to make his cameo).

While we all might not be feeling Usher's latest music move, we can't deny that he knows how to craft an interesting video. Check out his latest when you press play.


TAGS:  usher, Zaytoven
Previous: Moonchild Embrace Uncertainty In ‘Get To Know It’ Next: Durand Jones & The Indications Pour Their Hearts Out On ‘Don’t You Know’