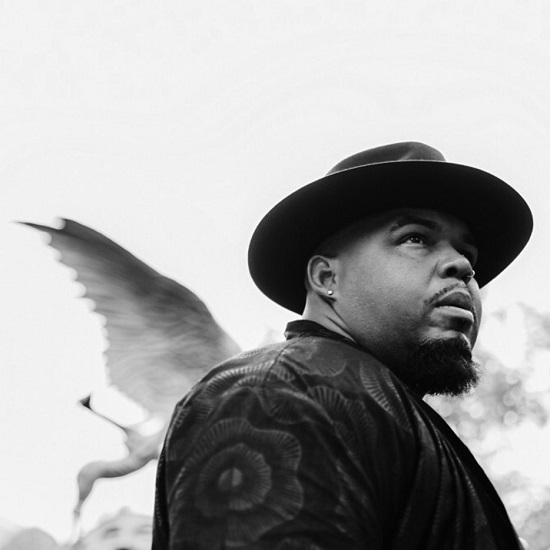 Following the 2010 release of his album The Adventures Of Mr. Las Vegas, Anu Sun spent the better part of this decade writing and producing tracks for some of our favorite jazz and R&B artists. Now the talented musician is ready to step back into the spotlight – not just for the sake of releasing music, but to deliver a purposeful message with his forthcoming project, Sanguine Regum.

The title, which means "blood of kings" in Latin, hints at the impetus that prompted his studio return. Anu explains, "I had a message to deliver, a perspective to convey, a sore I wanted to rip the scab off of. Our story is one of tenacity, a regal story that spans far beyond the slave experience and the target that’s been placed upon our foreheads." With this in mind, it becomes clear why he chose "KAEPtain AmeriKKKa" as the set's lead single.

Anu uses the genre-merging, socially conscious tune to address the present quandary with America and controversial football star-turned activist Colin Kaepernick. "Why must you hate and degrade us / Try all you want, you can’t wreck us," he raps with conviction. Tribal Hop femcee Farrah Boulé and polymathic artist Mike Larry Draw follow suit with visceral verses that command our undivided attention. The track is musically gripping as well. On one hand, it brings to mind an automated factory machine...mindlessly producing indistinguishable goods ("patriotic" groupthink, anyone?). But the percussion-driven arrangement also evokes a feeling of stoic resistance (#takeaknee).

While Sanguine Regum was crafted to make a statement, it's scope isn't a one-sided affair solely focused on weighty themes. In contrast, the album's second single "HateIEverMetcha" is a bit of a twist on the "Dear John" letters of yesteryear. Futuristic synth and rhythmic percussion lay the framework for the soulful bop with an infectious hook. Humorously bitter and all kinds of petty, singer Bria Monét joins Anu to deliver this musical missive about a relationship gone sour.

Sanguine Regum is currently slated for a February 8th premiere with an album release party on February 22nd at NYC's Blue Note Jazz Club. In the meantime, you can pre-order the album and stream "KAEPtain AmeriKKKa” and "HateIEverMetcha" below. Link up with Anu Sun via Twitter and Instagram for tour updates and more.