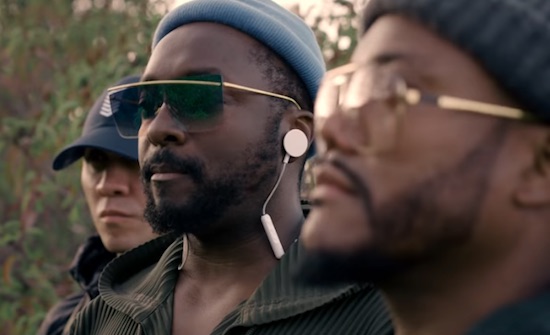 At a time when it’s become trendy to declare “issa vibe” to describe just about anything, GRAMMY Award-winning group Black Eyed Peas have put their art where their mouths are. For their latest single “Vibrations pt. 1 pt. 2,” the always unpredictable band take things back to the basics over a mellow yet head nod-inducing groove. Taboo, will.i.am and apl.de.ap all take turns rhyming about reverting back to their original sound while elevating to new heights, both musically and in their personal lives. For example, will.i.am touches on his new vegan lifestyle noting, “You eat the yellowtail, i'ma eat the plant-based / I ain't chewing on no food, with two eyes and a face / Got a new attitude, gotta stay elevated / If somebody hate, let them hate and kinda motivate.”

The accompanying video matches the simplicity of the song’s subject matter as well as the tranquility of the track. We watch as the trio makes their way through the lush greenery along the peaks and valleys of a canyon trail. They continue on this journey before the track transitions to a trap-style beat for part 2. They perform their respective parts in front of a black backdrop, while we catch glimpses of new member, vocalist Jennifer Reynoso. Both the track and the video are nearly 4-and-a-half minutes of stripped-down goodness, offering fans a much-needed break from much of today’s chaos and drama.

Catch BEP’s “Vibrations” and watch their latest video below. If you haven’t already, be sure to add their album Masters of the Sun Vol. 1 to your collection from your favorite digital platform. Described as “an early version of themselves,” the project boasts a few high-powered features, including hip-hop pioneer Slick Rick on "Constant pt. 1 pt. 2," a verse from Nas on the album’s opener "Back 2 HipHop" and Phife Dawg, Ali Shaheed Muhammad and De La Soul’s Posdnous on “All Around The World.”