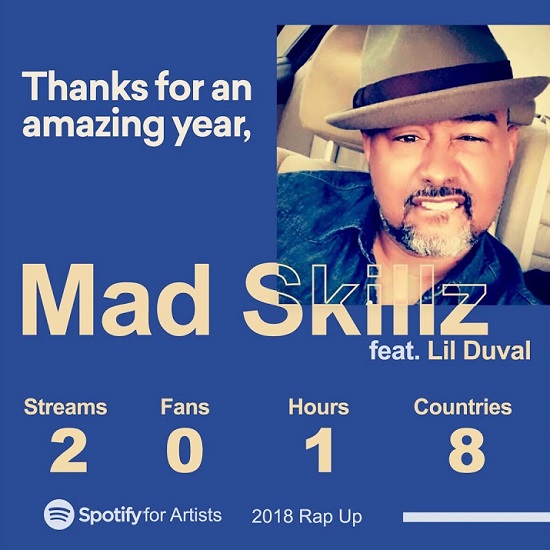 Congratulations, folks! We survived another year (and a particularly rough one for many of us). But of course, a year's not officially done until we hear a "Rap Up" from Virginia's own rap recounter Skillz. The seasoned vet has been giving us witty recaps of years past for well over a decade, and he shows no signs of stopping with the 2018 edition.

Set to the beat of Lil Duval's sleeper hit "Smile" — and featuring a cameo from the comedian-turned-hitmaker at the track's start — the "2018 Rap Up" takes us through the year that was. He hits on some points that we won't soon forget, including Black Panther's box office takeover, Safaree's big reveal, Beyoncé's Coachella moment and the royal wedding of Meghan Markle and Prince Harry. He also takes us through some moments that we'd rather forget (like Kanye's many transgressions, 50 Cent's petty antics, the "King Of R&B" debate and anything involving y'all's president). Skillz ties it all up pretty neatly without missing much of the last 365 days of ups and downs. He also keeps it pretty funny with his trademark witty punchlines and a few ad-libs that will catch you by surprise and provide a good chuckle.

Before you go any further into 2019, take a moment to say goodbye to last year and reminisce over what went down with Skillz's "2018 Rap Up" — available in both an unedited and clean version — below.