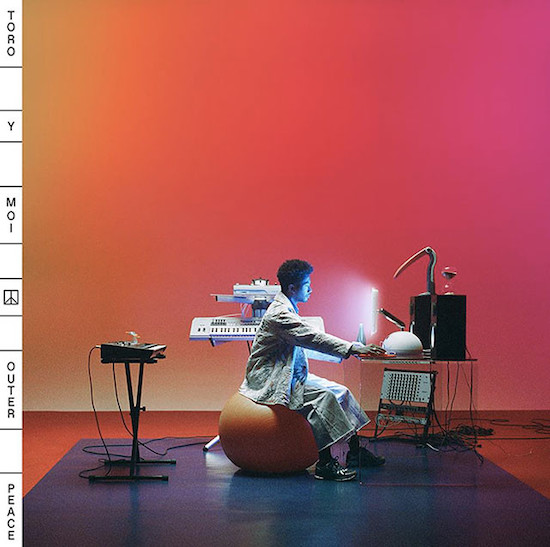 After a relatively quiet 2018, Chaz Bear aka Toro y Moi resurfaced toward the end of the year with new single "Freelance" and news of an impending album, Outer Peace. At the time, he explained that the album was made in "response to how disposable culture has become and how it affects creativity. While listening, you might pay attention or ignore — either way that's OK, this is music for a creative mind." He made good on his word with the release of the introspective yet bouncy album, which dropped officially on January 18th.

From the album's opening notes, Bear creates an experience that is at once perfect for both an attentive listening session and as background music. Things kick off with "Fading," an upbeat number that finds the artist floating between the despair of having someone slip through your fingers and keeping the faith. He continues on the path that leads straight to the dance floor on the second single taken from the album, "Ordinary Pleasure."

As background music, Outer Peace offers up a solid half-hour's worth of mid-tempo music designed to keep you driving forward, whether it be for a power cleaning session or workout music. Songs like "Who Am I," "Laws of the Universe" and "Baby Drive It Down" are fun on the surface, providing the perfect vibe to zone out and lose oneself in the music.

However, the flipside of an album created with two types of listeners in mind is that a closer listen can reveal a layered complexity that belies the happy-go-lucky sounds the music creates. In fact, the lyrics reveal sentiments and thoughts that are anything but feel-good. Closer inspection of "Who Am I" uncovers a Toro y Moi who ponders the ease of losing oneself as an artist and creator. "Kawasaki, slow it down / This might be my brand new sound / Psychedelic, oh wow / Add an accent to your sound / Now I don't know who I am," he sings.

"New House" gets straight to the point with its melancholy and moody keys that echo the underlying sadness the lyrics reveal. Here, he shuns the glamorous, carefree lifestyle often portrayed in music, instead taking on the very real feeling of despair that plagues many. "I want a brand new house / Something I cannot buy / Something I can't afford," the chorus repeats throughout the song.

The rich blend of sounds brought forth on Outer Peace isn't the only output coming from Bear lately. Just a few days after releasing his sixth album, he surprised fans with a previously-unannounced mixtape titled Soul Trash (c) 2019. The enigmatic artist took to Instagram to announce the release, which clocks in at 23 minutes, posting simply the title and a Dropbox link. From what we can tell, Soul Trash appears to be a collection of looped and chopped-up samples that perhaps didn't make the cut on other projects. Whatever the reason that has Bear feeling so musically generous these days, we'll gladly take it and enjoy the sounds put forth.

Check out Outer Peace below from the artist's own Company Records and be sure to add Soul Trash to your collection for free.99.