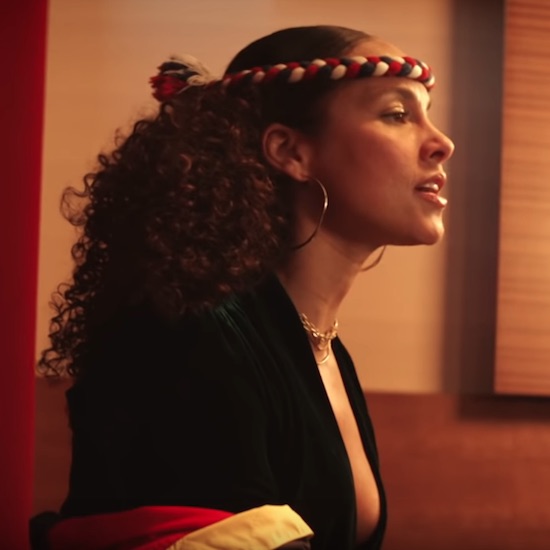 Last week, Alicia Keys decided to use her GRAMMY Awards hosting gig to jump-start her return to music with the release of her latest single "Raise A Man" as soon as the show ended. In an effort to make sure it doesn't get forgotten, the songstress now delivers a music video to ensure we keep our eyes on her. Directed by Bill Kirstein, Alicia goes back to her roots in the visuals, as she sits at a piano in a swanky studio to sing her heart out about loving her man.

Wearing a lowcut blouse, braided headband, curly ponytail and her no-makeup look, Alicia gets lost in the music while singing and playing the keys. The camera pans over to a cellist accompanying Keys and later a larger group of musicians and friends surrounding her for an intimate listening session. At the end of the video, she picks up her son Genesis and dances with him as the cool kids snap their fingers and wave their hands in the air like they just don't care.

It's a simple treatment for a simple song, and we're glad to see Alicia Keys at the piano and playing mom all at the same time. Watch the video for "Raise A Man" right here to see Alicia pluck at the keys and your feelings when you press play.