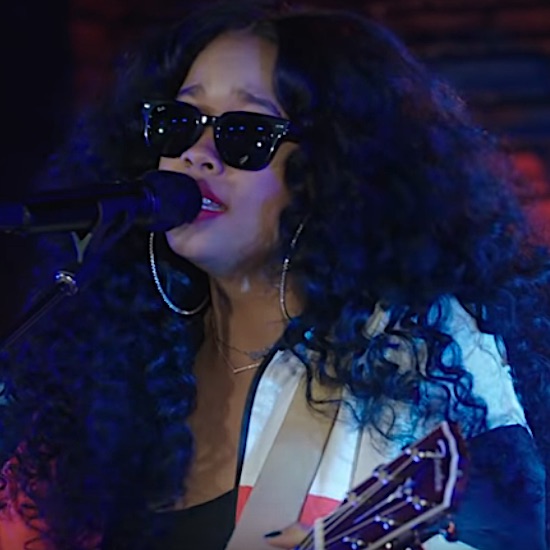 MTV is still kicking. Although the cable network is more known nowadays for reality and game shows, they haven't totally forgotten about the music in Music Television. One of their music initiatives is MTV Push, which is a platform that gives all-access to artists they deem to be the next big thing. They pick a new act to highlight each month, and following in the footsteps of Jorja Smith, Chloe x Halle, Jessie Reyez, SZA and Khalid, the MTV Push artist for February is none other than two-time GRAMMY winner, R&B's It girl and soul savior H.E.R.

For her turn on MTV Push, H.E.R. shared some tidbits about her life and times in a sit-down interview. The Bay Area-native got into music early; her father was a musician in a cover band and she naturally she gravitated to the instruments. Her parents indulged her interests, which eventually turned into her passion and here we are, two GRAMMYs later. She continues detailing her life story in the piece and spoke on her creative process and desire to showcase her musicality more, which she effortlessly did in a mini-concert to follow.

In front of a diverse audience, H.E.R. commanded the stage like a seasoned veteran for her short-but-sweet set. She kicked things off with "Carried Away," the first cut on her latest EP I Used To Know Her: Part 2, and showed all the way out on guitar, bass and keys. From there, she picked her guitar back up to strum away her pain on "Fate," taking the audience to church in the process. H.E.R. ended things on an even higher note with her bop "As I Am" from I Used To Know Her: The Prelude to close things out in a mighty way.

Fall deeper in love with H.E.R. after you watch her MTV Push interview and mini-concert and check out additional clips on the MTV Push website.


TAGS:  H.E.R.
Previous: Micah Robinson Shares His ‘Heart Song’ With Those In Need Next: PJ Morton & JoJo Come Together For Love On ‘Say So’