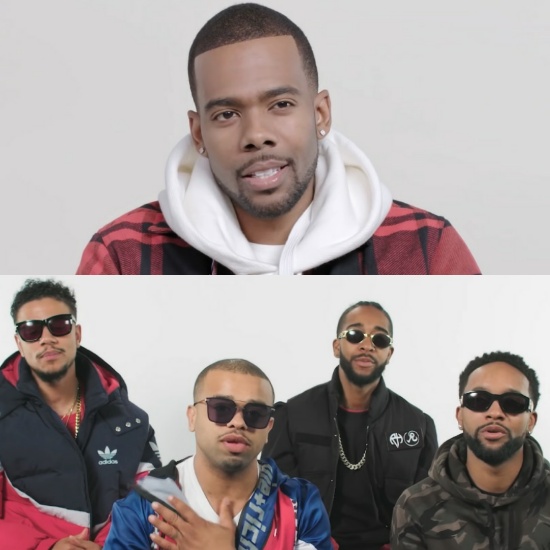 ELLE magazine’s "Song Association," a celebrity quiz game, has become quite a guilty pleasure. The rules are simple: artists are given a word and they have 10 seconds to sing that word in a song. While it sounds easy, it can be harder than it seems. Joining past contestants Kelly Rowland, Justine Skye and others in the hot seat are The Millennium Tour buddies Mario and B2K. Were these gentlemen able to keep up with the ladies?

Mario came through dripping with confidence that he would score 15/15. He started off strong when given the words “candy”and "money," singing “Candy” by Cameo followed by “Successful” by Drake and Trey Songz. However, he tripped up when thrown the word “song” trying to get the lyrics to “Song For You” by Donny Hathaway. He continued to fumble on “time” but recovered with “call,” humming Usher’s “You Don’t Have To Call.” He even managed to “slide” in Mr. C’s “Cha-Cha-Slide” and his own “Just A Friend 2002” for “friend.” Mario’s final score was 12/15, which wasn’t bad but didn’t put him in the running with the top 5 on the coveted "Song Association" scoreboard.

Did the fellas of B2K fare any better? Omarion, Raz B, J-Boog and Lil Fizz did not come to play but played to win. What made their segment fun was the fact that all four were throwing out answers, which quickly turned into a "Song Association" medley. The word “wild” inspired them to sing “Wild Thing” by The Troggs, “Wild Thoughts” by DJ Khaled, Rihanna and Bryson Tiller and “Wild Wild West” by Kool Moe Dee. We also got another medley of “girl” with “Cause Love You” by Lenny Williams, their own “Girlfriend” and then The Temptations' “My Girl.” The guys also sang songs by Earth, Wind & Fire, D’Angelo and a funny impression of Next to rack up a perfect score.

B2K now joins H.E.R. and Ella Mai at the top of the scoreboard. Of course, when you have four people competing instead of one, it’s not quite the same. But, they also sang more songs, so maybe it was more entertaining for the audience, justifying the additional lifelines. Let us know how you feel and play/sing along.