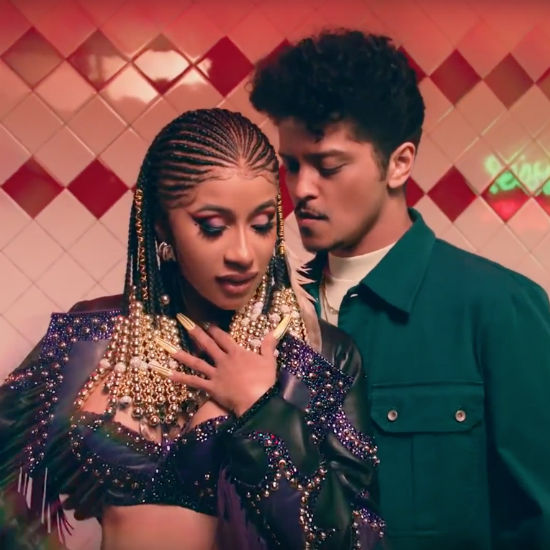 If you thought that chemistry between Cardi B and Bruno Mars was off the charts on their latest single “Please Me,” wait until you watch the video. Directed by Mars and Florent Dechard, the clip finds the never shy Cardi and the ladies man Bruno bumping and grinding in a local taco joint.

Taking place "somewhere in Los Angeles," the clip begins after the party ends and folks are trying to get some late-night eats to soak up the liquor. Bruno is kicking with his boys when Cardi and her girl crew step up in the spot licking on lollipops. The two lock eyes in the diner, and it’s on poppin’ after that. Cardi and company give us a little slight bop while she spits hot fire. Meanwhile, Mars spits his best game while he and his boys pull up behind the ladies and put their moves on. Of course, if there’s going to be some dancing in the video, Bruno is going to show off, which he does as the leader of his pack. Cardi holds her own with her body rolls and sexy moves. After dancing all on the chairs, tables and countertops, the combined groups leaves the diner. From there, the flirtation between Cardi and Bruno continues to the parking lot and into separate cars as they follow each other to the after-after party.

Elements of the "Please Me" video are reminiscent of Michael Jackson’s “The Way You Make Me Feel” video, including Bruno’s wardrobe and some of the cinematography. But while MJ was steady trying to chase a girl down, the heat between Cardi and Bruno is never in question.