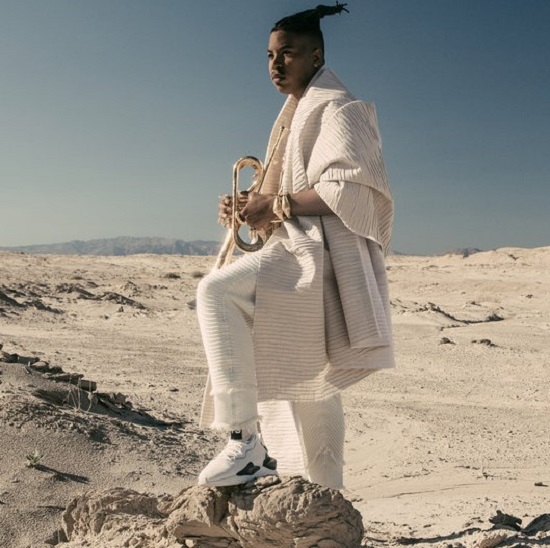 At 35 years of age, Christian Scott aTunde Adjuah is still considered a "young'un" by today's jazz standards. But those who know, recognize that this virtuosic trumpeter/composer/producer is a pioneer and a legend in his own right. Never mind his enviable roster of collaborators, the jaw-dropping pace of his studio output, wanderlust-worthy tour stops and one of the flyest customized horns on the planet; it's Scott's divergent, forward-thinking approach to his craft that deserves our respect and secures his position in the highest echelons of the genre. So the announcement of his forthcoming project Ancestral Recall, along with a preview of the title track, was a pretty big deal. Now, with the album scheduled to premiere next week, he gives us another teaser with his unconventional love song, "Forevergirl."

Co-written with frequent collaborator Sara Elizabeth Charles, "Forevergirl" is a textured composition that marries opposing forces – a chaotic sense of urgency with dream-like bliss. The musical contrast is executed beautifully throughout the song, fusing elements of jazz, soul, hip-hop and new-age. The always-impressive Chris Turner entrances the listener with vocals that mirror the muted-but-vibrant, romantic tones of Christian's horn. Meanwhile, Mike Larry Draw unleashes a lyrical flow that keeps pace with Corey Fonville's unrelenting, accelerated beats. The track is also infused with a feeling of spontaneity, delivering an adrenaline rush while simultaneously evoking a sense of calm.

The artist describes the creative process behind "Forevergirl," stating, "I wanted to sonically mirror some of the things I had seen in an analytic cubist rendering of two lovers. In that form, an object is taken apart and reassembled in abstraction to depict the object from as many perspectives as possible. Essentially giving a more global viewing of what the object is comprised of. I wanted to create in sound what I was seeing. So there are a multitude of parts/voices collapsed onto one another to stamp out ambiguity in the composition, to help focus a more clear reading through sort of encapsulating the sentiment in sound into a confined space. You can hear this in the many layers of trumpet, muted and non-muted, and in what I wrote for Chris Turner. A different take on constructing a love song. As my brother Terrace Martin says 'there’s a thousand ways to say I love you.' I wanted to channel that in this one."

We're loving "Forevergirl" and think you will, too. Stream the track below and pre-order Ancestral Recall ahead of its March 22nd release date. UK Bouncers, be sure to check his website for remaining March dates of his tour, including multiple shows at London's Ronnie Scott's.