Elle Varner & Wale Serve Up The Sexy In ‘Pour Me’ 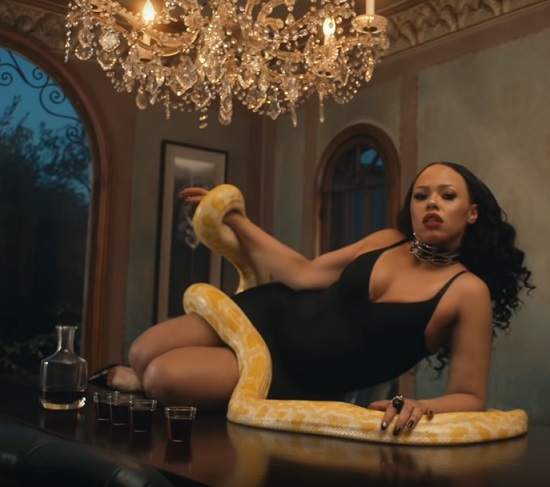 Just when we were about to put out an APB on Elle Varner, the songstress turned up with her new single "Pour Me" and promises of a new album. Now the singer proves she wasn't playing with the release of the official video for the track.

Elle is all about the sexy in the clip. We see the singer rocking slinky looks that reveal a lot of skin and give us a whole new side of her. The camera, meanwhile, lingers over her body like a longing lover as she gives smoldering stares and lusty looks. If that's not enough for you, Elle takes it even further as she slithers around with snakes, bringing an element of danger to it all. She's not the only star here, though. Featured guest Wale holds it down for his homegirl by supplying bookending verses, adding to the song's cool factor as he rocks super dark shades and what looks like the coziest sweater ever.

"Pour Me" looks to be just the beginning of Elle Varner's 2019. She's already performed at the Black Girls Rock! Festival and she'll continue on the festival circuit this summer when she rocks the stage at this year's ESSENCE Festival. Plus, that aforementioned upcoming album is also on its way. Prepare yourself for Elle's return by watching "Pour Me" below.