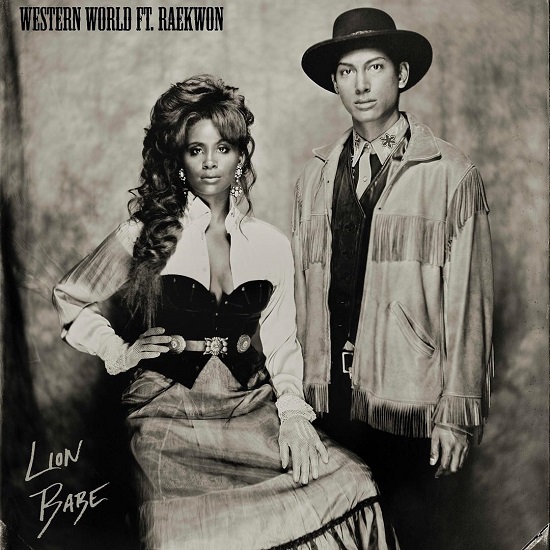 It's almost time for the release of the new Lion Babe album. No, seriously! Now that we've finally gotten a confirmed release date for Cosmic Wind, the New York-based duo has been bombarding us with new material and visuals to let us know what's in store. For their latest release, they take us into a "Western World" with a little help from Staten Island's own Raekwon.

If the track immediately sounds familiar, it's because it's built on a sample of the 1986 Pet Shop Boys song "West End Girls." The duo freak it with a bit of R&B flavor, building up the bass line and adding in piano chords and rhythm guitar licks to make it more their own. Lyrically, vocalist Jillian Hervey sings of a girl trying to make it in the big city. "In a Western town, a Western world / Only they will see," she sings. "In a Western town, a Western world / It's so hard to find some peace." Still, while lamenting the harsh reality of city life, she still finds hope and positivity, offering encouragement to seek out community to make it through the hard times. Raekwon, meanwhile, spits a grimy 16 that comes with its own electric guitar solo and adds just enough edge to keep things grounded.

"'Western World' is a New York record inspired by the Pet Shop Boys and their classic hit 'West End Girls.' It’s about the current climate of our American culture and soul," they said about the track. "We’re honored to have Raekwon help paint this wild picture of the present."

Get into Lion Babe and Raekwon's latest groove below.


TAGS:  audio, Jillian Hervey, Lion Babe, Pet Shop Boys, raekwon
Previous: Mariah Carey Takes Us On A Fabulous Subway Ride In ‘A No No’ Next: Tank And The Bangas Announce New Album ‘Green Balloon’ & Draw Us Into Their World With ‘Ants’