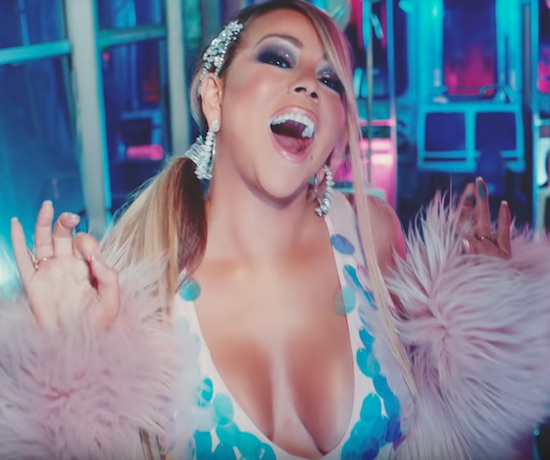 When Mariah Carey sampled Lil Kim’s 1995 hit “Crush On You,” for her single, “A No No” we were a bit apprehensive. The “Fantasy” singer, a pioneer of using hip-hop beats for R&B hits, has had less success using the technique in recent years. But, something about the track worked, giving us the sass of a good and grown diva that the singer has become, along with the nostalgia of her legendary catalog. Now, would she keep that same energy in the video for the track? Thankfully, yes. In the clip, Mariah takes us on a fabulous journey through the underground scene of New York City. But how does exactly does she take this journey? In a limo? By a tourist bus. Via party bus? Well, this is Mariah – the grand diva of all divas – after all. So for the New York native to take over a whole subway car is light work.

Mariah and some crazy cool kids throw a party during their neon-lit subway ride. Andy Warhol would be proud. Mariah rocks a number of sparkling dresses and furs that compliment the Warriors meets Lisa Frank aesthetic of her surroundings. Beyond serving looks and smizing for her life, we also get to see a crew of dancers, including her bae Bryan Tanaka, give us their best two-steps, eight-counts and more. Mariah’s kids, Moroccan and Monroe, better known as #DemBabies (who aren’t quite babies anymore) even make a quick appearance running through the chaos. The only people who don't make cameos in the video are Lil Kim, Missy Elliott and Cardi B who are on Mariah's wish list for the remix.

Short but very sweet, the video for “A No No” is about as long as a ride to the next stop on a subway line. It's a fun fantasy that is so very Mariah.