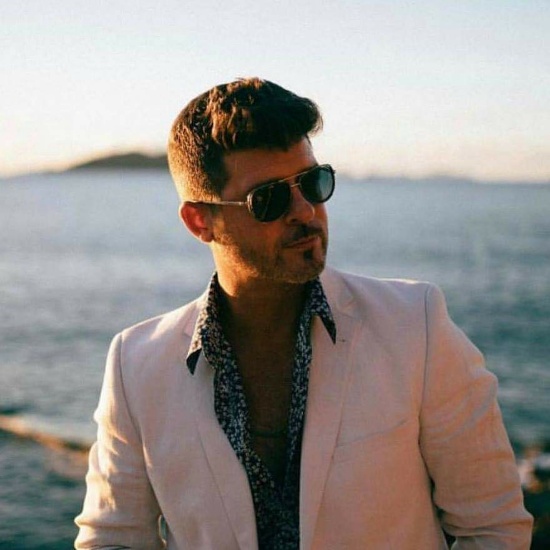 It's been an admittedly rough decade for singer/songwriter Robin Thicke. Though it didn't start out that way – photogenic marriage, the birth of his firstborn, diamond-selling, GRAMMY-nominated song, "Blurred Lines," a comical role on BET's Real Husbands of Hollywood and guest mentor on The Voice among other things – lawsuits, divorce and the sudden death of his beloved father turned his seemingly perfect world upside down. He recently gave us some musical insight into this dark period with his 2018 single, "Testify." Now he returns to the studio with "That's What Love Can Do," a revelation on what prompted his journey toward healing.

For his first new music of the year, Thicke stays in his wheelhouse, delivering a slow-tempo ode to the power of love. His melodic falsetto glides over a groovy throwback arrangement he co-produced by Pro Jay. While piano, guitar and violins create a pleasant, romantic setting, the background harmonies and sunny horn section save the track from potential monotony. Robin switches to his modal tone midway through the song, particularly effective as he waxes sentimental, "When the morning comes, I see your eyes and feel the sun / And I know I'm right where I belong." The muted trombone solo by Lemar Guillary provides an unexpected but gorgeous finish to the singer's heartfelt statement.

With his job as judge on FOX's surprise-hit reality show The Masked Singer now firmly secured for a second season, the recent birth of his new baby girl Lola Alain, plus a new album set for release later this year, Mr. Thicke seems to be on track to close the decade on a high note. For now, stream/download "That's What Love Can Do" and watch artist Victor Matthews create something special in the lyric video below.