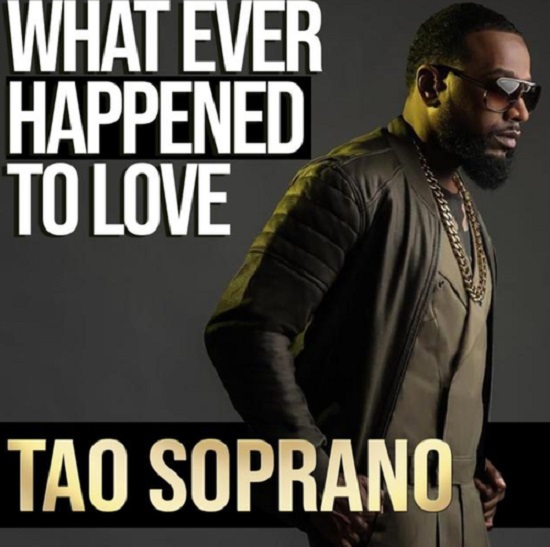 Throughout the annals of R&B group history, it's been standard practice for a member or two (or all, in some cases) to shoot their shot at a solo career. While this doesn't necessarily signal "the end" for the band – and it doesn't always mean that the person has left for good – the group dynamic is never quite the same afterwards. Sometimes the magic is lost forever, but other times, it pushes the members to even greater success, collectively, individually or both. Tao Soprano fans are rooting for the latter as the Dru Hill member just independently-released his anticipated debut single, "What Ever Happened To Love."

Pairing soulful piano and guitar with synth and programmed drums, the mid-tempo track is heavily influenced by the sounds of classic soul, yet it maintains a contemporary feel. Tao is doing his "good, good" singing here, using his grown-man vocals to deliver an impassioned plea to win his woman back. Another part of the song's charm is the fact that it almost sounds like it could be part of Dru Hill's catalog. Blame it on the spirited background vocals (is it Dru?), lending harmonic enhancement that help make this an addictive jam worthy of repeat plays. Either way, we're feeling this solo venture, and hope it signals that the talented singer has more to come.

We'll have to wait and see what the future holds for Tao Soprano and his bandmates. Obviously, Dru Hill has got some survival skills, continuing on despite the departure (and return, in some cases) of members like Sisqo, Woody, Jazz and Scola. (Remember, the whole reason Tao joined in the first place was to replace Woody back in 2008.) And while Tao and Dru have been a bit vague as to his current status, one thing is clear: Tao is quite talented and deserves his moment in the spotlight. The playing field is certainly large enough for everyone, so here's hoping it's "all love" among the fellas.

Tao's "What Ever Happened to Love" is currently available for stream/download, and you can keep up with the singer via Instagram. Meanwhile, Dru Hill will continue to tour throughout the year and is rumored to be releasing new music in the near future.