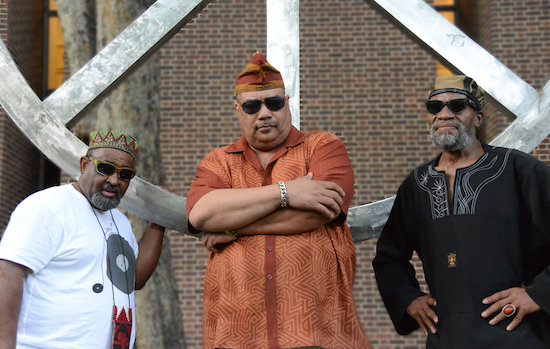 After breaking their 20-year hiatus with the release of 2018's Understand What Black Is, legendary outfit The Last Poets are back with a new album, Transcending Toxic Times, and its new(-ish) first single, "For the Millions."

The celebrated godfathers of hip-hop will drop their latest studio album on May 10th on Ropeadope Records. To highlight the new album announcement, members Abiodun Oyewole, Umar Bin Hassan, and Baba Donn Babatunde have released the first single taken from the project, "For the Millions." Initially published as a tribute to the Million Man March back in 1995,  the group has been performing a stripped-down version since at least 2015 and released another version in 2016, the latest iteration bears the funkiness of producer and bassist Jamaaladeen Tacuma's handiwork at its core.

In Tacuma's hands, "For the Millions" gets transformed into a house number reminiscent of their early work. Oyewole's commanding voice details the African-American experience from the Trans-Atlantic Slave Trade to a present-day celebration of our resilience and the continuing quest for freedom. "Even when we have nothing to say / We are the sounds / That put color and spice in the day," he booms over Babatunde's percussion.

Transcending Toxic Times is being described as a work that "reflects the range of human emotion: anger, scorn, frustration, challenge, beauty, sorrow, love and joy are all present." In addition to the group, the album also features appearances by poets Ursula Rucker, Wadud Ahmad and Malik B., one of the founding members of The Roots.

A glance at the album's tracklist reveals that 50 years after their inception, The Last Poets remain steadfast in their mission of shining a light on the issues of truth and equality. Take a listen to "For the Millions" and be sure to add Transcending Toxic Times to your collection when it drops on May 10th.