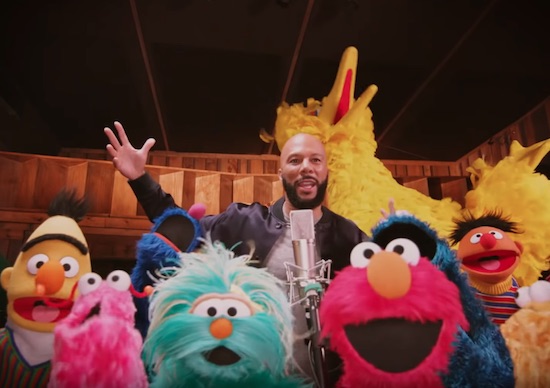 People often forget that the street part of Sesame Street isn’t just about their location. Big Bird, Elmo and the rest of the gang been down and celebrated in the hood for years. Over the decades, the celebrated children's show has featured appearances from many hip-hop luminaries. Now Sesame Street has hooked up with rapper Common, producer Kaytranada, multi-talented group BadBadNotGood and jack of multiple trades Phonte of The Foreign Exchange for a song about R-E-S-P-E-C-T.

The message is simple: “Give it! Live it! RESPECT!” Common lays down the basis of the message, while the Sesame Street puppets join him in the booth with their own ad-libs. In addition to the usual cast of characters, there are also some guest puppet appearances from characters from HBO shows Game of Thrones and Westworld and a shout out to Insecure.

Common's “Give it! Live it! RESPECT!” is part of Sesame Street’s Respect Campaign. In addition to the new song, there are also clips featuring the actual characters from the series mentioned in the song. In the Game of Throne’s video, “Respect is Coming,” Elmo from the House of Respect negotiates a peace treaty between Cersei and Tyrion Lannister. In “Respect World,” Cookie Monster acts as peacemaker between the characters Bernard and Delores, sharing some chocolate chip goodness and milk. Unfortunately, there’s no Insecure-inspired video where Molly, with the help of the new intern Big Bird, learns how to share the spotlight with her co-workers, but you can’t win them all.


TAGS:  BadBadNotGood, common, Kaytranada, phonte, sesame street, the foreign exchange
Previous: Donald Glover Introduces His adidas Originals Line With Some Help From The Original Queen Of Comedy Mo’Nique Next: Lizzo’s Got The ‘Juice’ On ‘Jimmy Kimmel Live’ & On New Album ‘Cuz I Love You’