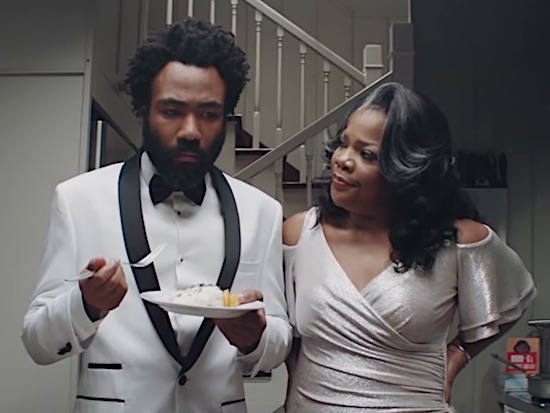 Between his award-winning show Atlanta, his Amazon-exclusive movie Guava Island co-starring Rihanna, his music career as Child Gambino and numerous other projects, it’s a wonder that Donald Glover has any time to sit. But at least we know he’s standing comfortably thanks to his new collaboration with adidas. His “Donald Glover Presents” line is set to re-imagine three of adidas’ Original classic shoes: the Nizza ($80), Continental 80 ($100) and the Lacombe ($90). To introduce his line, Glover has created a short film. Of the line and the film, he said, “Value isn’t quantified by what you wear, rather the experiences from them. And you make the decision on what works for you, you live through your own lens.” While the shoes make a few cameo appearances in the film, the real star of the clip is comedienne Mo'Nique.

In the film, Donald is visiting his aunt, played by Mo’Nique. Composed of various vignettes, each scene is pretty much a set up for Mo’Nique to roast Donald and his inability to keep his shoes clean. At the beginning of each scene, there’s a quick shot of the sneakers, usually with Donald dropping something on them to dirty them up even more. The Queen of Comedy comes for Donald’s neck and his ashy ankles throughout the clip. Even in the last scene, when Glover is over Mo’Nique’s auntie antics and walks off, Mo’Nique doesn’t let up on his ashiness. “Don’t scratch your calves because it’ll start a brush fire. It’s California, you’ve gotta be careful, baby,” she clowns.

Donald Glover’s adidas collaboration drops on April 26th, so they’ll be available in time to get fresh for summer. In addition to their partnership with Glover, adidas has also partnered with Beyoncé on a new collaborative line and Willow Smith on a shoe made from 100% recycled materials. Hopefully, you’ll have better luck keeping your new kicks clean than Donald.