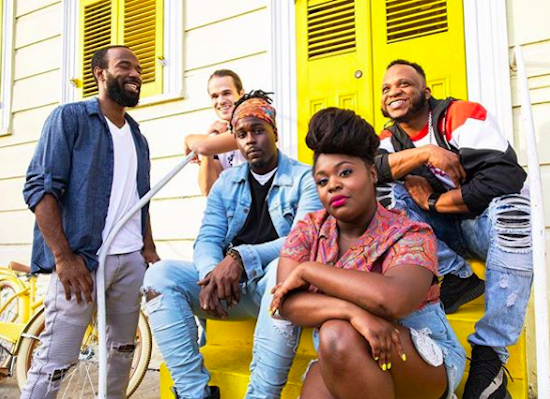 As we await the May 3rd release of Tank and The Bangas' sophomore album, Green Balloon, the New Orleans-based band drops off the newest single taken from the album, "Nice Things."

On the single, the band led by their fearless leader Tarriona "Tank" Ball, deliver big on the upbeat, genre-bending sounds that catapulted them to the top spot of NPR's Tiny Desk Concert Competition two years ago. Here, the Bounce-Worthy alums stick to the signature whimsical and fun musical hybrid that we've come to know and love. Tank straddles the line between singer, poet and trap rapper as she sets her sights on being treated to nothing but the best by any means necessary. She rattles off luxury gifts like Gucci watches or purses (that she may or may not be receiving from an ex she hit up).

"Nice Things" seems primed to expand Tank and The Bangas' fanbase, even more, thanks to its catchy beat and hook. In the midst of it all, Tank even slyly name drops rapper Common and his supergroup with Robert Glasper and Karriem Riggins with the line. "Makes common sense like August Greene."

The second single from Green Balloon, "Nice Things" comes on the heels of the album's first single, "Ants," which dropped last month. Big things look to be in store for the rollout of the project, due out on Verve Records. The band has a spate of promo dates on the horizon, with the next stop in Indianapolis on April 15th. Just before that, on April 11th, Tank and crew will also unveil a stripped-down version of "Nice Things" filmed in partnership with VEVO. If you just can't get enough of the band's bubbly frontwoman, be sure to also check her out on season two of Dr. Yaba Blay's "Professional Black Girl" YouTube series in which Tank discusses the relationship she has with the stylist behind her quirky, creative hairstyles and the impact growing up in New Orleans has had on her artistry.