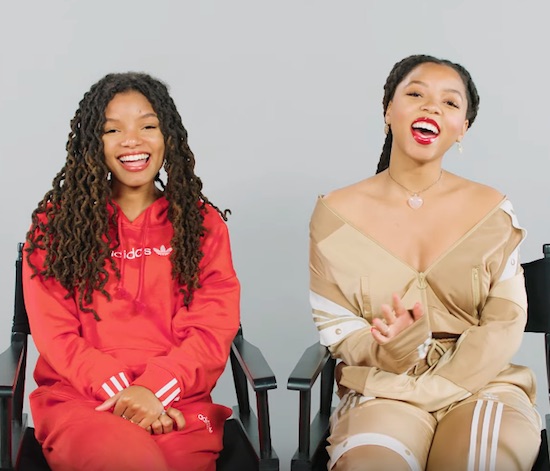 Chloe x Halle prove that two singers are better than one on ELLE's latest round of "Song Association." The soulful sisters brought their big smiles, sunny dispositions, adidas tracksuits and heavenly harmonies to the "Song Association" soundstage.

Before the game got started, they actually weren't too confident in their abilities. "I don't think we'll be bad, but I don't think we'll be masters at it," Halle Bailey confessed before things popped off. Despite any initial doubts, they began strong with the word "pretty," with elder sis Chloe Bailey taking the lead to sing their boss lady Beyoncé's "Pretty Hurts." They continued racking up points with the words "money" and "me" and showed off by singing two songs for each word. They got tripped up on the word "up" but quickly redeemed themselves and showed their range by singing tracks from Nat King Cole, Lady Gaga, The Color Purple and Mary Mary, and, of course, they got the opportunity to slip a couple of their own songs into the mix. Although they didn't join "Song Association" sensation Ciara at the top of this season's scoreboard with their final score of 13 out of 15, they counted it all joy, impressing even themselves that they did that well.

At the end of the video, Chloe x Halle promise that new music is on the way, which we're all the way here for following their banging contribution to the Little soundtrack just last month with "Be Yourself." Their new music may be a mystery, but we do know that they'll be reprising their roles as twins Jazlyn and Skylar when grown-ish returns to Freeform on Wednesday, June 5th to wrap up the second half of the second season.