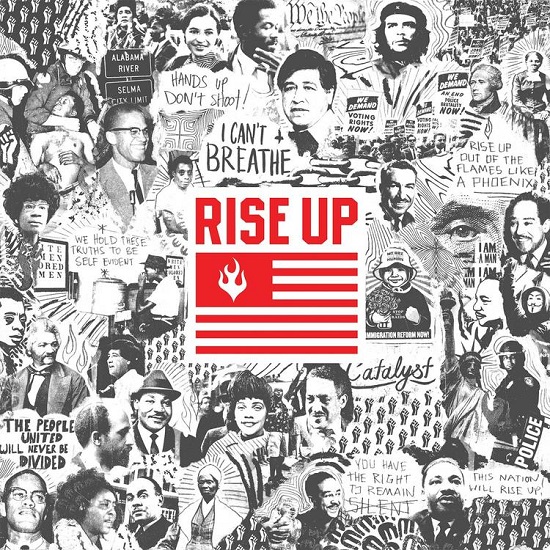 Music is often used as a form of escapism, a way to detach from our less-than-perfect realities. But music is also an effective mirror that reflects the times we live in. Many artists have used their creative powers for this very reason, and the current political climate in this country has caused the floodgates to open. Producer/DJ J.Period is the latest to enter the mix with his long-awaited release The RISE UP Project.

Two years in-the-making, the 10-track album is co-executive produced by J.Period, Young Guru, DJ Jazzy Jeff and DJ Khalil. Initially sparked by the EPIX documentary series America Divided, The RISE UP Project has since evolved into a soundtrack for social change, on a mission to ignite a fire for justice and equality. The album is noteworthy for tackling the hot-button issues plaguing our society, but it also deserves credit for balancing the weight of its many collaborators.

Our first listen came in 2017 with the hard-hitting track "Miranda," featuring Jesse Williams, Rhymefest and Xzibit. Titular single "RISE UP!" boasts even more big names, featuring Black Thought, Posdnuos, Pharoahe Monch and Joss Stone as they join forces to explore the meaning of "resistance." Over an Isley Brothers sample, Dead Prez, Sa-Roc and Maimouna Youssef honor the bravery of protesters on "SOLIDERS." Dead Prez also appears on the emotional tune "See the Light" with stirring vocals from Andra Day. Meanwhile, the dynamic duos of DJ Jazzy Jeff and Eric Roberson and The PLAYlist and Aloe Blacc address law enforcement with "Mr. Officer" and "Hands Up, Don't Shoot," respectively.

Prior to the album release, J.Period explained, "For two years, we’ve been on a mission to bring artists together across the country to inspire all-star collaborations, dynamic performances, and honest conversations… through music." Stream The RISE UP Project below – which also features Tall Black Guy, Aaron Camper, Dayne Jordan, Mayda Del Valle and Ozay Moore – then let us know if he succeeded in his mission. After purchasing the album, make plans to be in the audience when Yasiin Bey joins Period and Black Thought for a second iteration of The Live Mixtape during this year's Roots Picnic.