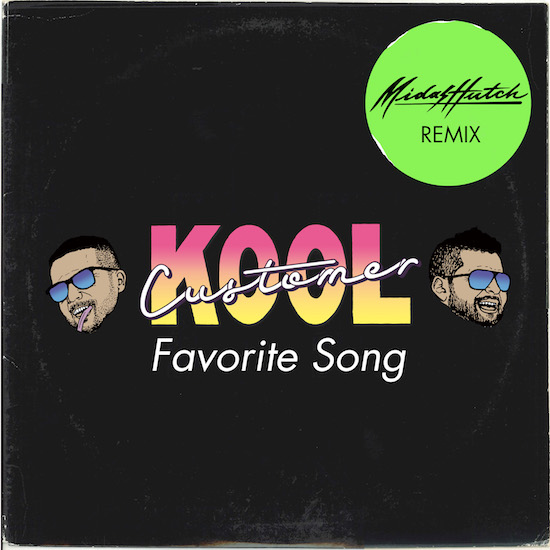 We've been longtime fans of Dutch producer/remixer/DJ FS Green – from the days when he went exclusively by the name FS Green to his more recent days under the Midas Hutch alias. As Midas Hutch, he's released four EPs – The High, The High (Remixed), The Feels and The Feels (Remixed) – and worked his remixing magic with other artists. The latest act to get the Midas Hutch remix touch is duo Kool Customer who leave their track "Favorite Song" in his very capable hands.

Kool Customer is one of the many side projects of producer/remixer/DJ B.Bravo who is joined by Rojai here. The group's music has a funky throwback feel similar to Tuxedo but with a totally different vibe. They actually have a unique description for their music: "think West Coast Boogie Funk á la Dam-Funk, thrown in Styrofoam cup with some '80s synth steez, then escorted to the strip club (at 3AM) dressed head to toe in a white tux lined with gold chains." If that doesn't pique your interest to check out their self-titled debut album, we don't know what will.

"Favorite Song" is one of the more chill, laid-back tracks on Kool Customer, but it immediately caught Midas' attention when he first heard it and he knew he had to remix it. "The first line in ‘Favorite Song’ from the Kool Customer album is 'hopping on the freeway..." So when B.Bravo hit me up for a remix, it was an easy choice! The car is my go-to place to listen to music. Whether it be my own demos or new music that I need to vibe out to." We're glad that Midas was inspired to add his flavor to "Favorite Song," staying true to the original production but amping up the bass and synths on the body roll-inducing slow jam.

Press play to get your groove on to SoulBounce's exclusive world premiere of Kool Customer's "Favorite Song (Midas Hutch Remix)," and cross your fingers that this isn't the last time that all these cool cats collaborate.