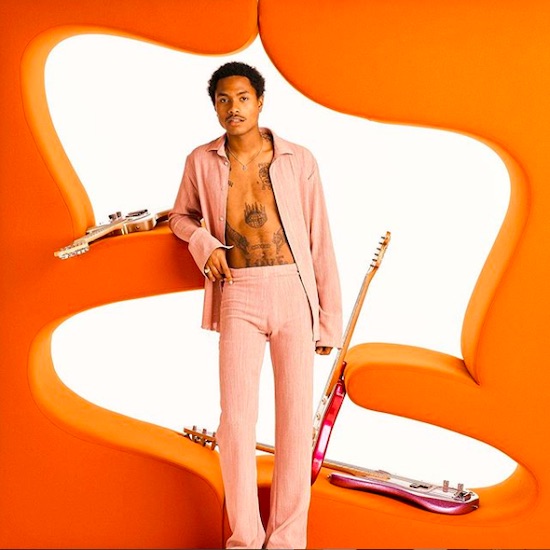 While approaching 21, most people would be content with throwing a good party and having his or her first legal drink. However, when you're Steve Lacy, you commemorate the event by dropping your debut full-length album entitled Apollo XXI.

The album gives fans their first fully-fleshed out look into the mind of this young, multi-talented musician, producer and member of The Internet. Though we got a glimpse a couple years ago with the release of his Steve Lacy's Demo EP, the 12 tracks found here dive deeper than we've ever been, giving us a chance to see what's really good with the band's youngest member.

Lacy flexes some serious vocals on songs like the opener "Only If," where he delivers a message to his younger self that things will be just fine once he learns to let go. He continues his self-exploration on the nine-minute long "Like Me," where he wonders how many other people are like him. "I only feel energy, I see no gender / When I talk 'bout fish, I wanna catch ya, I'm a fisher / Now they debate on who I like, they wanna see a list of girls and boys out here, so they can see if I'm official," he sings unapologetically about his bisexuality. His comfortability with himself is a breath of fresh air in an industry that is often smothered in toxic masculinity.

The best part about Apollo XXI is that it makes it obvious that just like his sexuality, Lacy's musical style also cannot be put into a simple box. His sound exists somewhere between traditional R&B, pop and rock. "Playground" and "Guide" shine the spotlight on his falsetto and guitar skills, easily sounding like they could have come from the late, great Prince. Even when the songs clock in at under two minutes, Lacy manages to pack a wallop of a punch into songs like "Basement Jack" and "In Lust We Trust," which both feel much longer despite their short playing times.

Though he's worked with everybody from Kendrick Lamar to Vampire Weekend, he doesn't call in a lot of favors from his musical pals, only featuring appearances from DAISY and actress Amandla Steinberg who joins him on "Amandla's Interlude." If the second half of "Outro/4ever" sounds familiar, it's probably because it appeared on Solange's When I Get Home on the Lacy-produced "Exit Scott (Interlude)" Not that he needs any help; with his debut album, Steve Lacy delivers an immensely satisfying and enjoying musical outing that is sure to gain him a lot of new fans in the process.


TAGS:  Amandla Steinberg, audio, DAISY, kendrick lamar, prince, solange, Steve Lacy, The Internet, Vampire Weekend
Previous: Will Smith & DJ Khaled Team Up To Remake ‘Friend Like Me’ From ‘Aladdin’ Next: Chris Brown Joins Tank To Get A Little More ‘Dirty’ On The Remix