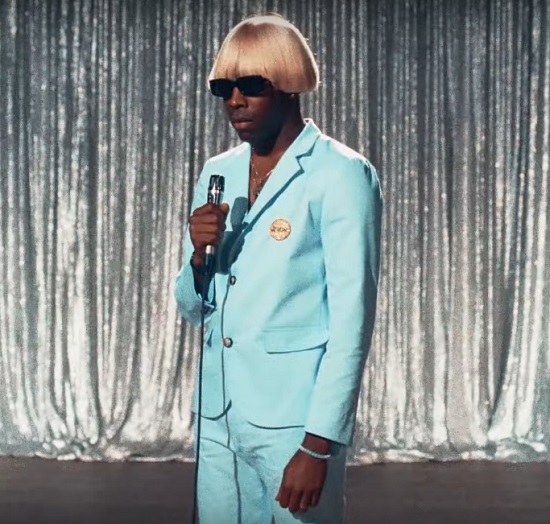 Tyler, the Creator is at it again with the release of his newest album IGOR. The album, which Tyler dropped last week, finds the rapper/producer revealing a more vulnerable side while expanding upon the musical palette that he laid out with 2017's Flower Boy, which included jams like "See You Again." To that effect, he's also brought along a host of collaborators, including Charlie Wilson and Playboi Carti who appear on the song "EARFQUAKE," which also happens to be the first track from the album to get a full-length visual.

The bass-heavy track finds Tyler begging a lover to stay after he caused the demise of their relationship. "Don't leave. It's my fault," he sings on the track as Uncle Charlie provides vocal assistance in the background. For the visual, Tyler goes heavy on his weird sensibilities. He appears as a musical guest on the Half-an-Hour With Pearl Edwards Show, with the hilarious Tracee Ellis Ross playing Pearl in all her awkward glory. Tyler, meanwhile, sports a blonde, bowl-cut wig and powder blue suit as he croons to the camera. Tyler sings with all his emotion on the show's stage but he does break Pearl's one golden rule: he smokes and then tosses the lit cigarette on the stage. This causes an on-set inferno that sends Pearl running from the set in fear as firefighters (one of which is also played by Tyler) come and save the day.

"EARFQUAKE" is representative of the vulnerability that Tyler, the Creator is offering up on the album — which includes contributions from Kanye West, Solange, Santigold, Pharrell Williams and a host of others. Check out the delightfully weird video for "EARFQUAKE" below and stick around to stream IGOR in full.


TAGS:  audio, charlie wilson, playboi carti, Tracee Ellis Ross, tyler the creator
Previous: Miki Howard Is Back With A Soulful New Sound On ‘Fed Up’ Next: Judith Hill Gets Down On The ‘Upside’