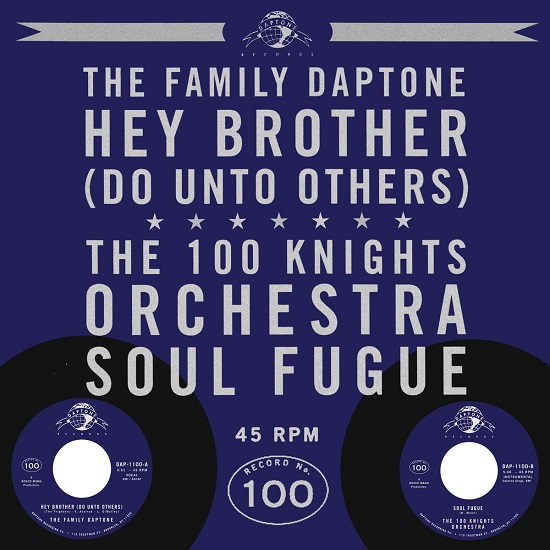 When Daptone Records began almost 20 years ago, it filled a major void in the industry by delivering the authentically raw, vintage sounds of soul, funk, gospel and Afrobeat that had seemingly gone underground. That void would resurface much sooner than expected, however, when the indie label suffered major losses throughout 2016 and 2017 – namely, the deaths of Sharon Jones, Charles Bradley, Cliff Driver and Dan Klein (lead singer of The Frightnrs). Such a devastating blow to their roster could've easily caused Daptone to fold, but to remix an old adage, "You can't keep a good label down."

In recent years, the label has kept their memories alive with posthumous releases like Soul of a Woman and Black Velvet. But later this month, Daptone will celebrate another milestone: the release of its 100th 45 rpm record. Co-founders Gabriel Roth and Neal Sugarman recently chatted with Billboard about the landmark recording and the significance of using this particular format. It turns out that a 45 of Sharon Jones & The Dap-Kings' "Got a Thing On My Mind" was the catalyst for Daptone's creation. As Sugarman explains, "When we started, that was a way for us to raise money. Even before we were putting out albums, it was a way for us to put out singles. There was a real culture for that. DJs we liked were playing 45s; the records we were buying were mostly 45s. It’s just still a super cool format."

Like any good 7-inch vinyl record, the release features an A-side and B-side. The centenary celebration begins with "Hey Brother (Do Unto Others)." Written and originally performed as a rocksteady anthem by The Frightnrs for their debut LP Nothing More to Say, the track is lovingly re-imagined as a soulful groove by The Family Daptone. Led by Ms. Jones and Mr. Bradley (whose vocals were obviously recorded before their deaths), the collaboration also features The Frightnrs, Saun & Starr, Lee Fields, Naomi Shelton, Duke Amayo (of Antibalas) and James Hunter over an undeniable instrumental by The Dap-Kings and Menahan Street Band. Roth expounds on the cohesiveness that can be felt while listening to the tune by saying, "It’s like 'We Are The World'....We got all of our singers together, trading verses and lines and stuff...everybody seemed to really love the idea of being together on a record like that and having a kind of celebration for the hundredth thing. Every one of those singers that I asked, after I explained what we were trying to do, they really jumped through hoops to try to make it happen."

The record's flip side is a cinematic masterpiece titled "Soul Fugue," composed and arranged by Roth (under his alias, Bosco Mann) and performed by "dueling" orchestral armies called The 100 Knights Orchestra. Featuring a mind-boggling array of musicians from The Dap-Kings, Antibalas, The Budos Band, Manahan Street Band, The Extraordinaires, The Soul Providers and The Daktaris, The 100 Knights crammed into a studio to lend their talents to this rare occasion. The layered composition is also unique in that it draws inspiration from an unlikely source, math – more specifically, the Fibonacci Sequence and the number 100 (maybe also "100 Days, 100 Nights," perhaps?). Marching to the drumbeat of Dap-King's Homer Steinweiss, Daptone’s many brass players take command of the left speaker led by Dave Guy on first trumpet. Meanwhile, Dap-Kings' Brian Wolfe sets the cadence as the woodwind players dominate the right speaker, led by Ian Hendrickson-Smith on alto sax.

Via press statement, the label shared, "What started out as an ambitious thank you to you, our beloved fans, has now also become a loving tribute to the brothers and sister we've lost...May this disc forever live as a token of our gratitude, and keepsake of the times when our departed loved ones shared the stage with us." Daptone's 100th, "Hey Brother (Do Unto Others)/Soul Fugue" is currently available for pre-order. In the meantime, scroll down to preview the incredible sound of both tracks ahead of the official June 28th release.