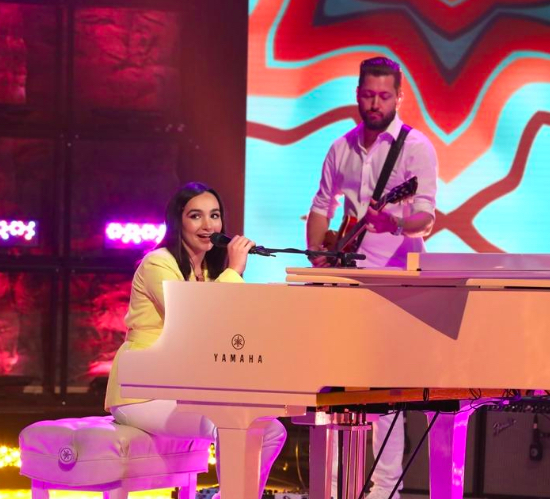 It takes a lot of talent to draw the attention of the legendary Quincy Jones. Well, singer/pianist Emily Bear did just that at the tender age of 8 after being introduced to the world with an appearance on The Ellen DeGeneres Show in 2007. Under Jones' mentorship, Bear has quickly risen through the ranks of the jazz world, fronting her own trio and dropping her Jones-produced debut album of original jazz compositions, Diversity, in 2013. Now at the age of 17, the Illinois native is ready to step beyond her jazz music roots with her latest single, "Dancin," which she premiered by returning to Ellen more than a decade after her first performance on the show.

The song marks Bear's first televised performance as a singer, a skill she revealed she first tried her hand at a mere two years ago. For her first foray into the pop/R&B realm, she crafts a lighthearted mid-tempo groove about shaking off the post-breakup blues and reclaiming a song that had previously symbolized her heartbreak. The triumphant vibe of the song is fueled largely by her jazz-influenced piano skills and a funky bassline.

With just one spin of this song, we think it'll be easy to figure out why Jones took a chance on this child prodigy.