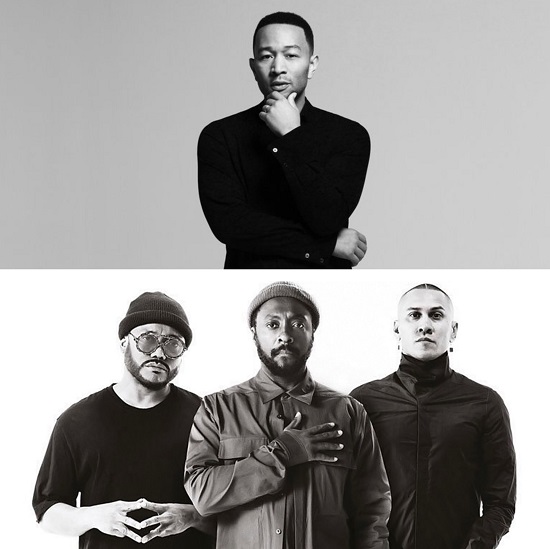 With shows like American Idol, The Voice and The Four still going strong, it's safe to say that America can't get enough of singing competitions. But any singer worth their salt will tell you that a great song is much more than the talented voice who delivers it. That's where NBC's new show Songland aims to bridge the gap, allowing the viewing audience a chance to appreciate the art of songwriting as well as the creative process from pen-on-paper to studio and/or stage.

Executive-produced by industry heavyweights like Adam Levine and Eurythmics co-founder Dave Stewart, the show follows undiscovered songwriters as they pitch their original creations to top recording artists and a panel of chart-topping music producers – Ryan Tedder, Ester Dean and Shane McAnally – in the hopes of creating the next big hit.

For the series' debut last week, Miami-based singer-songwriter Tebby Burrows' life was forever changed when guest celebrity judge John Legend picked her song, "We Need Love," as the winner. Initially critiqued for being a little too saccharine, the Bahamian-bred Burrows worked with McAnally who helped rework the breezy song into a studio-ready tune. Upon hearing the tweaked version, Legend offered his stamp of approval, saying, "The verses feel really nice now. It's super conversational...it really gave me chills, I felt it and [I'm] ready to record it." It wasn't just lip service either, as the official video premiered immediately following the episode.

Super-producer and Black Eyed Peas frontman will.i.am. served as the guest judge for Songland's second episode, which aired last night. Phoenix-native Adam Friedman bested three other contestants with his catchy song, "Be Nice." After will.i.am. suggested that he "keep it all about the bass," Friedman was paired with Dean who helped rework the tune into something better suited for Black Eyed Peas' style and sound. The end result premiered after the episode, featuring a guest verse from Snoop Dogg and a cool music video set in a roller skating rink. Taking it a step further, BEP plans to include the feel-good club anthem on their upcoming album, and will most likely perform it on stage this summer during their many festival stops.

Peep the clips for both songs below, then head to your favorite digital retailer to add "We Need Love" and "Be Nice" to your playlists. Songland airs Tuesday nights at 10 pm EST/9 pm Central on NBC.