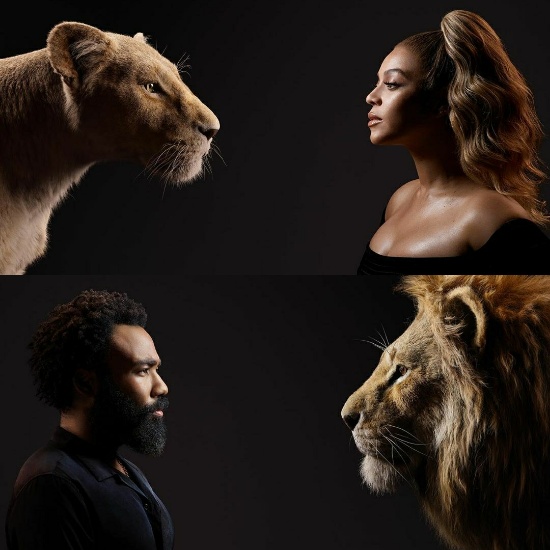 Unless you’ve been hiding under Pride Rock, you know that one King Beyoncé Giselle Knowles-Carter is starring in Disney’s live-action remake of the 1994 animated classic, The Lion King. Not only is she flexing her acting chops in the film, she's contributing music to the production as well. Of course, one of the most anticipated songs fans have been waiting to hear her take on is “Can You Feel The Love Tonight.” Written and composed by Sir Elton John with lyrics from Tim Rice, the ballad has been covered countless times, even by early viral pop culture star William Hung. But no one close to Beyoncé's level has attempted to cover the song. Until now. And she even gets an assist from one of her co-stars. With Donald Glover playing Simba to her Nala, the pair transform the song into a duet.

For Donald Glover and Beyoncé ’s version of the classic, the duo sticks close to the original. Beyoncé is…well, Beyoncé. While she doesn’t quite put any stank on the track as some of us might have hoped, she does elevate it. Actually , let’s be honest, she’s carrying it. Donald Glover, not known as a vocalist as much as an entertainer, sort of talks through his part. We weren’t expecting him to hit Elton’s notes, but he isn't hitting on much else. Meanwhile, Billy Eichner and Seth Rogan, who play Timon and Pumba, really sell their voice acting, as they lament the fact that their homeboy done went and got boo’d up.

In addition to appearing on the official soundtrack, Beyoncé is also releasing an album of curated songs entitled The Lion King: The Gift. “This is sonic cinema," said the artist in the official press release. "Each song was written to reflect the film’s storytelling that gives the listener a chance to imagine their own imagery, while listening to a contemporary interpretation.“ The first single, “Spirit” has been released and will also be featured in the updated film.

Disney’s The Lion King, starring a Black cast only rivaled by a Master P film, will hit theaters on Friday, July 19th. Before The Lion King roars into theaters, hit play to hear Beyoncé and Donald’s version, and see if you remember the words to sing along with them.