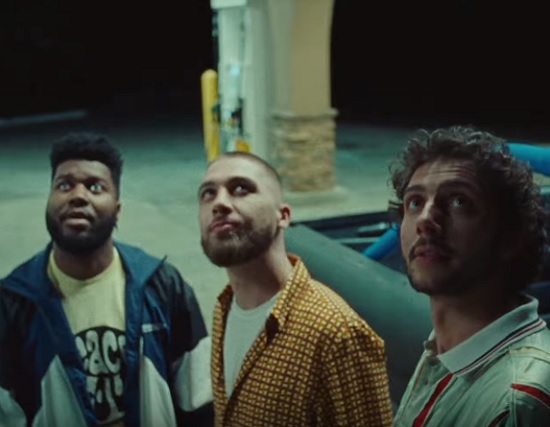 You can't trust everybody's hot sauce. That's a lesson that Majid Jordan learns in the video for their single "Caught Up." The joint is the latest we're getting from the Canadian duo's upcoming project and it features none other than "Talk" singer Khalid.

"Caught Up" continues in the same vein of smooth, chilled-out R&B that the fellas have become known for since dropping into the scene a few years back alongside their big homie Drake. Over the carefully crafted vibe of the track, singer Majid Al-Maskati sings about being caught up in love and also the allure of a city like Los Angeles. "'Caught Up' is a song about getting carried away," he told High Snobiety. "We have an interesting, impermanent relationship with [Los Angeles]. It’s a really amazing place to connect with artists. But spend too much time out here and you start losing sight of life outside of the bubble. It’s that gorgeous scenery and culture mixed with the parties, the people and the glamour that leave you caught up and drifting away from home and the ones you love the most."

Now, back to that hot sauce. In the song's video, the fellas and Khalid take a trip to the desert. Splitting up for a bit, Majid Jordan grabs tacos with a special local sauce provided by a peculiar looking patron. What happens is an unexpected, psychedelic trip similar to the hallucinations seen in Fear And Loathing In Las Vegas. They somehow end up at a rodeo while having visions of aliens and flashing colors. Meanwhile, Khalid is just left sitting at a bar wondering where the hell they're at.

Though no official announcement has been made, "Caught Up" signals that Majid Jordan definitely has something in the works — especially when you consider that they released two other singles last September. Watch what they get up in with Khalid in the song's video below.