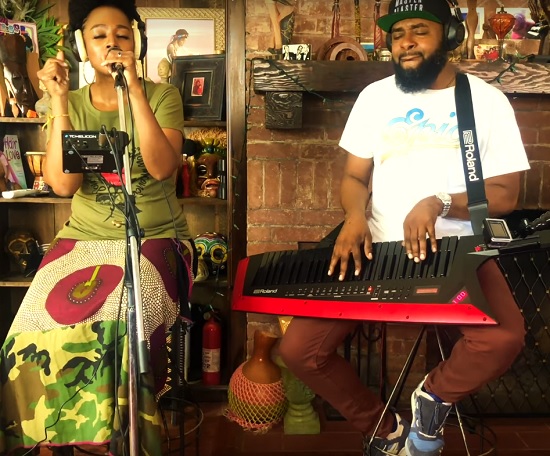 What's better than the combination of Mike Blankenship, Sy Smith and Michael Jackson? We recently discovered just how nice a meeting of the three can sound when Mike and Sy teamed up for a cover of MJ's Off The Wall track "I Can't Help It." Though Sy has included the song in live performances before, there's something to be said about the synergy between her and Mike and how they were able to take the song to places it hadn't been. As if that weren't enough to make our summer, the two are at it again, this time offering an acoustic take on the track that manages to incorporate even more of MJ's magic into the mix.

The video finds Smith and Blankenship sitting down for the jam session. Mike sets his trusty keytar to the acoustic guitar setting and jams along as Sy provides the vocal fireworks. Like the studio version of the song, Sy injects a bit of jazz and soul into the proceedings while incorporating riffs on some of Michael's greatest hits into the mix. Except, this go 'round they add even more — including the version of "I Wanna Be Where You Are" recorded by a young Michael Jackson — before bringing it back home to the original melody of the track.

While hearing the finished product is always great, there's something to be said about seeing the chemistry between two artists as they conjure up a song. Mike Blankenship and Sy Smith definitely have an undeniable creative chemistry that's evidenced by the good time they're having in the clip and the dreamy way it all sounds as it comes together. See what we mean when you take a peek at their acoustic session below.