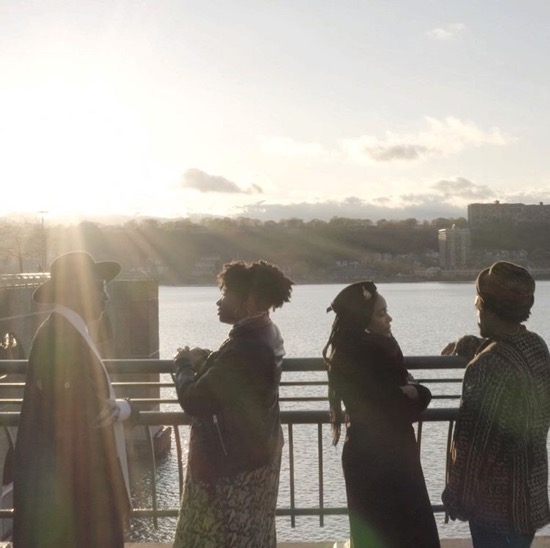 For his latest video, the sublime "Between Us 2" featuring Bilal, Shafiq Husayn headed to the Big Apple to help bring this ode to love to life.

Directed by Matt Lubansky, the sun-drenched video is like a love letter to Harlem as Husayn begins a stroll through the historic neighborhood. After linking up with Bilal, the two continue on past Harlem's famed brownstones before meeting up with their better halves in Riverside Park. Sweeping views of the city, including the budding treetops with the Hudson River shimmering in the background, provide the perfect playground for the quartet to enjoy some quality time together. The iconic Spirit of Harlem mosaic, which just a few months ago was at the center of controversy, also features prominently in the clip. Filmed back in April, the video manages to capture the warming vibes of hope and new beginnings that accompanies spring.

Bilal's silky voice floats effortlessly above Kamasi Washington's simmering sax on the third single taken from Husayn's latest album, The Loop, which dropped earlier this year. "Between Us 2" is the first single from the album to get the video treatment, however, a smart move considering that NPR named it one of 20 Best Songs Heard in March. Press play and join these lovers on their languid stroll as they explore one of NYC's most treasured neighborhoods and the love that binds them together.


TAGS:  bilal, Kamasi Washington, shafiq husayn
Previous: Emotional Oranges Want You To Put It Down In The Bedroom On ‘Don’t Be Lazy’ Next: Majid Jordan & Khalid Get ‘Caught Up’ In The Desert