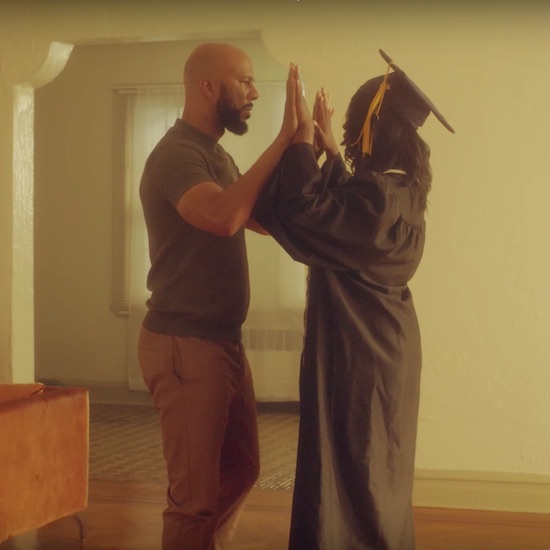 Rapper-turnt-actor Common is not taking his foot off our necks in 2019. After announcing his twelfth studio album, Let Love, would be arriving soon and dropping off the first visuals from the album in the form of the Swizz Beatz-assisted "Hercules," he returns with not one, but two, new clips to whet our musical whistles.

Perspective is the name of the game on "Show Me That You Love" featuring Jill Scott and composer Samora Pinderhughes. In the song and its accompanying video, Common revisits a conversation with his now-adult daughter, Omoye, in which she reveals that he wasn't as good as a father as he had previously thought. While she acknowledges that he was there in some form, she let him in on the fact that it was the things he didn't do that hurt her the most. This story plays out in the Sade Clacken Joseph-directed clip that is dotted with video footage of young Omoye and her father through the years. It concludes with a tearful scene in which the recent Howard University graduate, clad in her cap and gown, and her father tearfully stand face-to-face as they come to terms with the hurt caused by her famous dad along the way. It is a touchingly heartfelt moment that encapsulates the healing process and Common's acknowledgment of where he fell short as a young dad. "When I became a parent, I thought that I would be the one teaching my daughter. Boy was I wrong! My daughter has become one of my favorite teachers along with LIFE. This is a special one," he says of the video on his YouTube channel.

Before dropping this visual off, Lonnie Lynn blessed us last week with "Episode 2" of his single, "Hercules." In the first episode for the single, the video featured Com and Vince Staples thwarting a would-be robber in his tracks. However, for the second time around, he takes a much different approach in this black-and-white video. Directed by ART and produced by Cole Cook, the younger brother of Swizz's wife Alicia Keys, this video portraying a young black man out here trying to survive in a world where the odds are stacked against him. Keeping it all in the family, the video's protagonist is portrayed by Swizz's first-born son, Nasir Dean, making the scenes with him getting advice from Swizz all the more poignant.

As previously stated, both songs are taken from Common's upcoming LP, Let Love, which is due in stores and on digital streaming services August 30th.