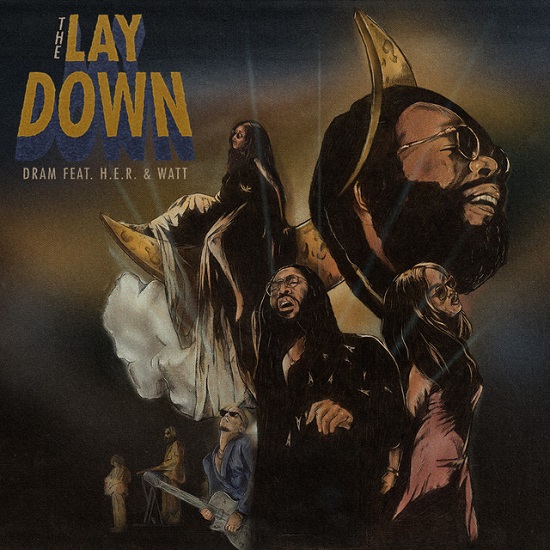 DRAM may have seemed all fun and games on his debut, Big Baby DRAM, but it seems that he's a man on a mission for his upcoming sophomore set. "No one sings anymore. Ain’t no true sangers out there! Nobody’s taking it to the stage. No one’s pouring their heart out, but that pattern stops here," he recently told Zane Lowe on his Beats 1 radio show World Record. He's looking to do his part to return soul music to its essence on the as-yet-untitled set, and he's providing his first example of that with lead single "The Lay Down."

"The Lay Down" takes its inspiration from the ballads of '70s funk and soul, with echoes of Bootsy Collins and Al Green reverberating inside its foundation. Legendary bass player Pino Palladino, Red Hot Chili Peppers's drummer Chad Smith contribute their individual magic to production by Andrew Watt (who is simply credited as watt here) that drips with love, lust and sensuality. Meanwhile, DRAM's deep and raspy voice is primed to seduce as he invites the listener upstairs to lay in his California king-sized bed. H.E.R. seems game on her guest appearance. Her honeyed vocal serves as the perfect counter to DRAM's as she responds to his request, letting him know that she's been dreaming of spending some time with him among the sheets. They then both come together for the chorus, singing, "I wanna lay it down with you / I ain't tryna play around with you." Then, as if the passion isn't high enough, it's all set ablaze with a fiery guitar solo courtesy of Happy Perez.

"The Lay Down" seems like a great intro to what DRAM will be doing with the upcoming album. "I’ve always considered myself more of a singer-songwriter so this time around, I’m really owning my R&B and soul roots," he told Lowe. "So, as you can tell, I’m excited about introducing you to the new Big Baby DRAM chapter." We're also excited and can't wait to hear what else he'll be bringing to the table. Listen to the pillow talk between DRAM and H.E.R. on "The Lay Down" right here.