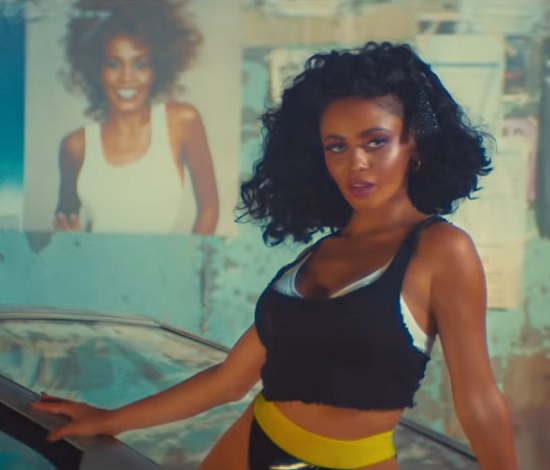 This summer has brought its fair share of surprises. Perhaps one of the biggest, at least in the music arena, was hearing Whitney Houston's voice soar again on Kygo's "Higher Love." The track, which repurposed Whitney's rarely heard cover of Steve Winwood's hit single, reminded us all of The Voice's eternal magic while also giving the masses something to dance to. The song's video also serves as a reminder by taking us back to the decade where Whitney reigned supreme: the decadent '80s.

It starts with a group of fellas walking down a dusty deserted road in present day. One of them breaks off to find a warehouse that happens to house a dance studio — only this isn't your average studio. Each of the dancers seems to be stuck in an '80s time warp. And if you weren't clued into that fact by the high-cut aerobics gear, the clip drives it home with tons of crimped hair, leg warmers, scrunchies and one dancer talking it up on a brick-sized cell phone. Unable to resist after falling for the dance class' instructor, our protagonist runs into the room only to find himself also transported to the neon-colored time, complete with period-appropriate activewear. After more than a few choreographed set-ups and nods to our girl Whitney, we're taken to a garden cafe where we discover that the whole scenario was actually the daydream of the instructor. Don't feel bad, though, because her imaginary Prince Charming was actually her waiter. You'd better make that move, girl!

We think the video is pretty darn cute, yet we can't help but imagine what it would've been like if Whitney Houston was here to star in it herself. Since that just can't be, the clip is definitely the next best thing.