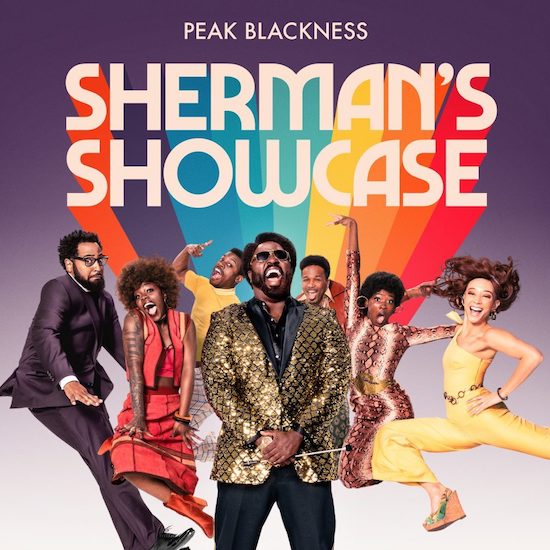 Phonte and Zo! have worked together extensively over the years via The Foreign Exchange, on their individual projects and with others. And who can forget the time that they collaborated to drop the EP Zo! & Tigallo Love the 80's! back in 2008? The '80s-centric cover project was something that the pair did for fun, and it turned into an underground classic. It is so beloved that people still ask Phonte and Zo! over a decade later when they're going to release a sequel. Both of them have gone on record saying that it'll never happen, however. Although fans will be hardpressed to ever get another volume of Zo! & Tigallo Love the 80's!, the next best thing is to check out their era-and-genre-hopping work on the new IFC series Sherman's Showcase.

Sherman's Showcase is a sketch comedy, variety show and Soul Train spoof all rolled into one created by Bashir Salahuddin and Diallo Riddle and executive produced by John Legend. Salahuddin plays the program's namesake, Sherman McDaniels, a host doing the absolute most alongside a cast of wacky dancers and eccentric musical performers. That's where Phonte and Zo! come into play. They were chosen by Bashir and Diallo to create original music for Sherman's Showcase, and they are flexing their creative and comedic muscles each week.

"Doing work for a show that touches so many different styles and eras of music gives me a chance to stretch out a great deal," Zo! told us about working on the music for Sherman's Showcase. "I get to experiment on certain drum kits or pull out sounds that I wouldn’t normally use for my own stuff." Zo! and Phonte do indeed spread their creative wings on a plethora of musical styles over the span of the fictional program's 40+ years.

Viewers have already gotten a healthy sampling of their musical finesse and foolery on the first few episodes. Phonte and Zo! contribute the "Sherman's Showcase Theme" songs throughout the years that play during the animated intros, but Tay even got some camera time. He guested as the James Brown-like character Jackie Redmond singing the ridiculous funk-soul song "That Ain't Right" on the show's debut. The talk of the first episode, though, was the track "Drop It Low (For Jesus)" that's become a viral hit. Written by Phonte, Zo! and Zuri Salahuddin – who performed it as lead singer of the group RWKSY (an acronym for "Real Women Know Something, Y'all") – the track is a ridiculously ratchet trap R&B slow jam that we pray we don't go to hell for bopping to. The second episode featured their production on the groovy, early '90s R&B-sounding jam "Time Loop" sung by Ne-Yo serving Rick James realness performing as a part of the futuristic outfit Galaxia. This week's episode introduced the multi-talented character Charade played by rapper Vic Mensa who gave his best Prince impression. Mensa as this Princely figure was absolutely genius casting, and Phonte and Zo! laced him with the track "Vicki Is The Water Warm Enough" that sounded straight outta Paisley Park.

There are other contributors to Sherman's Showcase's weekly soundtrack, but what Phonte and Zo! are doing on this show is nothing short of brilliant. But that's to be expected from these two. They've stepped into a new arena and are already making an impressive, memorable and hilarious mark. Now more people are getting put on to what we've known for a very long time. Stay tuned for more tunes from Phonte and Zo! on upcoming episodes of Sherman's Showcase and get ready to get your groove and laugh on when the Sherman's Showcase Soundtrack is released on Mad Decent at midnight.


TAGS:  Bashir Salahuddin, Diallo Riddle, james brown, john legend, ne-yo, phonte, rick james, Sherman's Showcase, the foreign exchange, The Foreign Exhchange, Vic Mensa, zo!, Zuri Salahuddin
Previous: DRAM, H.E.R. & watt Are Ready To Get Down On ‘The Lay Down’ Next: SoulBounce Exclusive: Dempsey Bolton Isn’t The Only One To Blame In ‘What About You’