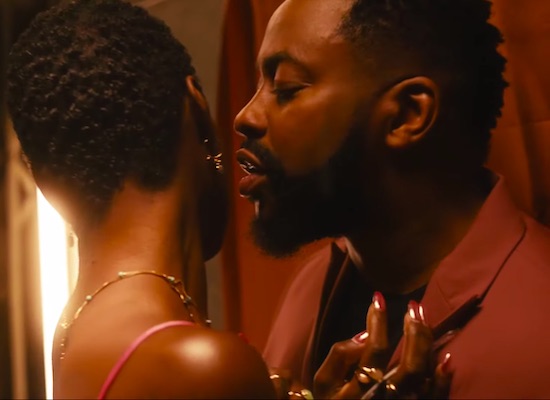 Sometimes, the right person can be so intoxicating that just being in their presence transcends time and space. That's exactly the place where Raheem DeVaughn seems to be in his seductive new video for "Just Right."

In the Chris Scholar-helmed clip, DeVaughn finds himself completely enamored (rightfully so) by singer/actress V. Bozeman. The mundaneness of laundry day takes a steamy turn once Bozeman steps into the elevator and presses play on a stereo on the floor. Almost instantly, she and DeVaughn find themselves intertwined, their skin glistening as they heat things up. The two make for a striking couple as they are seemingly transported to the cosmos before sweatily finding their, um, happy place towards the end.

The camera loves Bozeman, as it takes great care to put her beauty on display, leaving viewers with little doubt about why DeVaughn can't get her off his mind. This detail isn't completely by accident as he has revealed the song itself is meant to serve as a celebration of women. "This is an infectious anthem composed to celebrate not only women of black and brown color but all women globally," he explained in a statement.

"Just Right" is the first of 13 videos that the crooner plans to release from his latest album, The Love Reunion. DeVaughn conceived the videos as part of a larger storyline that has yet to be revealed. While such a large scale project would be difficult for some, it's just one of many upcoming projects he is currently working on. In addition to the videos, finalizing the last chapter of his album trilogy and putting in work with his LoveLife Foundation, DeVaughn is also hard at work in the studio where he is writing and producing several songs for Bozeman's upcoming album.

Until then, get into the sensual chemistry that he and Bozeman share in "Just Right." Be forewarned though — you may need a cold glass of water to cool off with once you're done.


TAGS:  Chris Scholar, raheem devaughn, V. Bozeman
Previous: James Blake Goes Art House For ‘Can’t Believe The Way We Flow’ Next: DRAM, H.E.R. & watt Are Ready To Get Down On ‘The Lay Down’