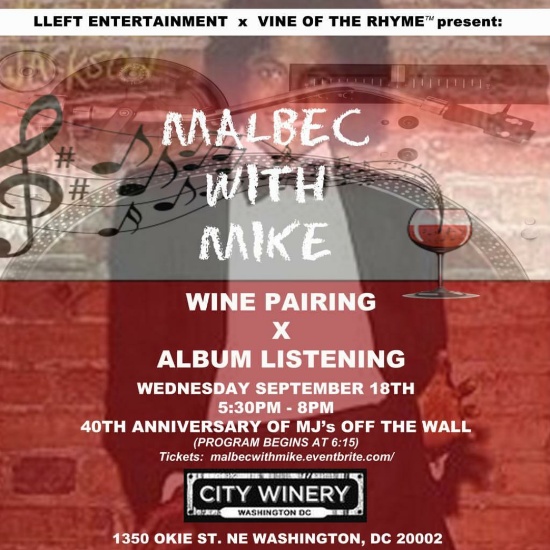 It's been a rough year to be a Michael Jackson fan, but the King of Pop's legacy remains intact despite numerous attempts to tarnish his good name. Included in that legacy is his hit album, Off The Wall, which just celebrated the 40th anniversary of its release in August. The beloved classic was his fifth solo album, but it was the breakthrough project that made his star rise higher and shine even brighter. Working with executive producer Quincy Jones and a host of famous songwriters and musicians allowed MiJac to level up, and Off The Wall is arguably his best album.

If Michael Jackson's Off The Wall is your jam like it is ours and you live in the Washington, D.C. area like we do, then you'll want to attend Vine of the Rhyme and LLeft Entertainment's upcoming wine pairing and album listening event, Malbec With Mike. The hippest happy hour is going down at City Winery DC on Wednesday, September 18th, and if it's anything like their A Glass of Purple Rain event where they commemorated the 35th anniversary of Prince's Purple Rain soundtrack, it's going to be a hella good time. DJ Pheelin' It, Dr. DeepCrates and Tracey Lee will make sure of that.

SoulBounce was in the house for A Glass Of Purple Rain back in July, and it was both entertaining and educational. We're pretty sure that Malbec With Mike will be more of the same with nostalgic sing-alongs, cool wine pairings and all the fun. We'll also be back with another Shop @ SoulBounce pop-up shop where attendees can peruse our selection of t-shirts, sweatshirts, tote bags and pins and make a purchase right there.

Tickets to attend Malbec With Mike at City Winery DC in the Wine Garden are on sale now through Eventbrite. Included with every ticket are three wine tastings during the event with food and additional adult beverages available for purchase. Early bird tix are already sold out, but reserved and advance tickets are still available and selling fast. DMV Michael Jackson fans, leave your 9-to-5 up on the shelf and come through to enjoy yourselves.