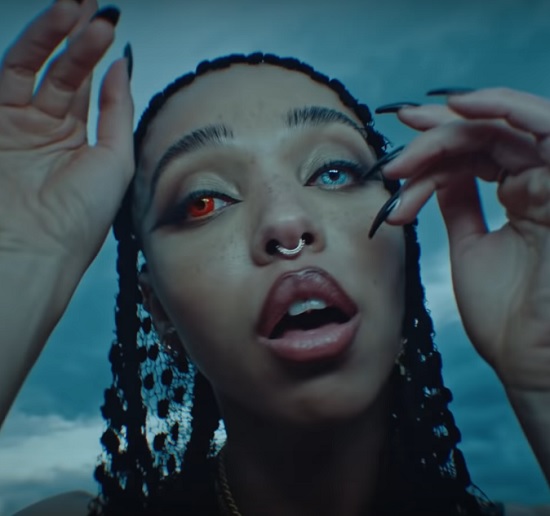 FKA twigs, our favorite singer who makes the weird look like fantastical works of art, will soon be returning to us with her upcoming album Magdalene. She's already given us an inkling of what to expect with first single and video "Cellophane," a vulnerable and exhilarating audio-visual experience. She continues in that direction with the release of her latest single "holy terrain."

The track finds her teaming with Future (along with Skrillex and Jack Antonoff on production duties) for a dark, trappy sound that is definitely attention-grabbing. That's just as much because of its head-nodding sound as it is for the juxtaposition of her feather-soft voice against the knock of the beat. The contrast serves to make the vulnerability even more palpable when she sings, "Do you still think that I'm beautiful when my tears fall like rain?" Future, meanwhile, appears through mostly ad-libs — though he does include a sing-songy verse near the track's end to make his presence more deeply felt.

For the song's video, twigs' vision is anything but holy. In fact, it's downright eerie. It finds the performer clad in black with red accents through most of the scenes as she writhes and moves with a team of dancers across the cracked earth of a desert setting. Where it gets creepy, though, is in the appearance of twigs' herself. When we first see her, she's sporting contacts that make one eye blood red and the other blue while she waggles fingers adorned with pitch-black fingernails at the camera. It's downright witch-y in appearance and the wavy, wobbly special effects and trippy lighting further contribute to that feeling. Her presence is so transfixing, though, that you wouldn't dare look away.

Magdalene, which will be a nine-track affair, is set to be released on October 25th. Get spellbound by FKA twigs when you peep the video for "holy terrain" below.


TAGS:  audio, FKA twigs, Future, Jack Antonoff, Skrillex
Previous: ’90s R&B Meets Classic Soul In Amerigo Gazaway’s Brandy & Billy Stewart Mashup Of ‘Sittin’ Up In My Room’ Next: The Bonfyre & 6LACK Have A Lot To Say On ‘U Say’