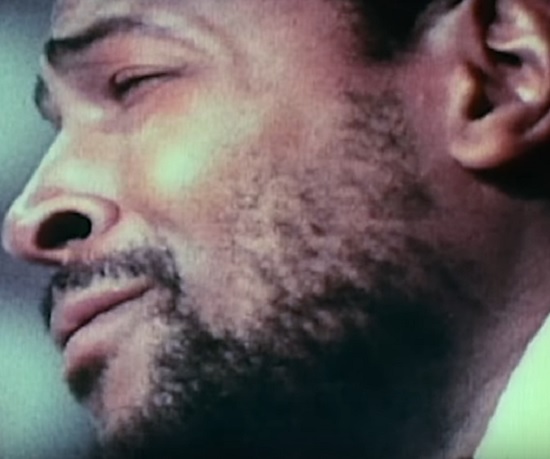 Marvin Gaye has been a force so ubiquitous in music that 35 years after his untimely passing we still speak of him as if he's here with us. Although his career spanned decades, he surprisingly only has one well-known music video under his cap: 1982's clip for his single "Sexual Healing." That changes now as Universal Music Group celebrates Motown's 60th by making Marvin's 1971 classic "What's Going On" the first video of its "Never Made" project, which aims to create music videos for songs that never had one.

Director Savanah Leaf steps up to helm the clip for "What's Going On," marrying archival footage of Marvin Gaye singing the classic with video from the present day. We first see Marvin in a clip from a '70s-era concert speaking the words from his song "Save The Children" before we're transported to modern-day Michigan. There, we see families dealing with the problems of the world — including the water crisis in Flint, school shootings, police brutality and the plight of the uninsured. Sadly, Marvin's nearly 50-year-old lyrics still ring true while being played over the scenes (and actually seem a bit more prophetic than they did in his day). After taking us to a rally in which protesters chant "no justice, no peace," the album version of the track segues into a live version in which Marvin, eyes closed, sweetly sings "I wanna know what's going on, baby." Half a century later, it's unfortunately still the same thing, different decade.

In addition to a new video for the ever-timely "What's Going On," Marvin Gaye is also among the artists included on the recently released Motown Unreleased 1969, which offers up 60 never-before-released recordings from stars like Diana Ross & The Supremes, Stevie Wonder, The Temptations, The Jackson 5 and more from the titular year. You can stream the collection in full below after checking out the clip.