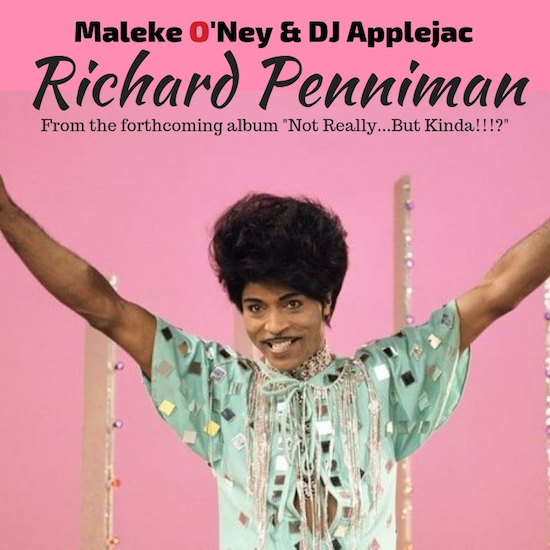 DJ Applejac loves a good collaboration. He plays well with others and has created some magic over the years. A few months ago, he linked up with crooner Nicholas Ryan Gant for a smoking cover of Crystal Waters' "Gypsy Woman." Now he is back with another collab, this time with fellow Atlanta creative and indie singer/songwriter Maleke O'Ney. The pair have completed work on their forthcoming project together entitled Not Really, But Kinda...!!!? and they are giving us an exclusive first listen of their debut single "Richard Penniman."

In case you couldn't tell by the track's title, the song finds its inspiration in none other than Little Richard himself, who was born Richard Penniman. According to O'Ney, she remembers seeing an old Little Richard interview and was enthralled by his over-the-top persona. "I couldn’t stop looking at him and listening to him," she admits. "He was uninhibited and his personality was humongous! His discontent with not being respected or recognized for his contributions to the music industry illustrated how I was feeling about my life at the time – so I wrote about it.”

"Richard Penniman" starts with audio of the flamboyant entertainer speaking over a thumping electro-soul sound bed provided by DJ Applejac. Richard's confidence and wit give way for Maleke to come through with equally confident lyrics. "I am soul, I am rock 'n' roll / I'm funk, I'm hot / I gave you everything you got," O'Ney sings, channeling her inner Little Richard on the chorus. The song ends much in the same way that it began with an audio excerpt of Little Richard talking his ish as only he can.

Press play to get a taste of Maleke O'Ney and DJ Applejac's future funk homage to Little Richard in this SoulBounce world premiere. Look out for more from the talented twosome when Not Really, But Kinda...!!!? is released in October.