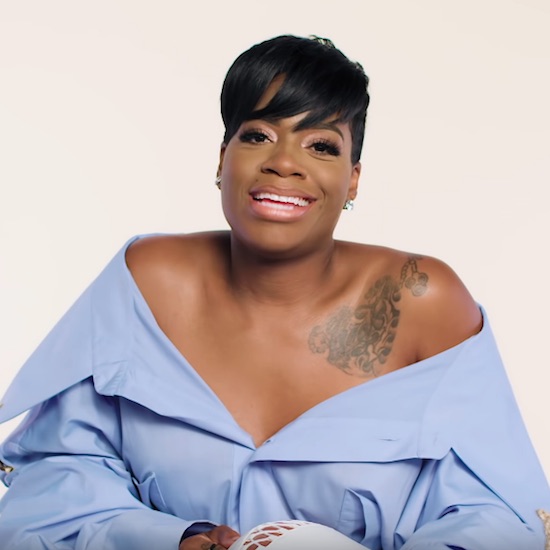 ELLE magazine has been pulling in some real kings and queens of R&B to play their game of "Song Association." In recent months they've welcomed Raphael Saadiq and PJ Morton, and the most recent R&B royal to join them is Fantasia. She has both her new album Sketchbook and The Sketchbook Tour to promote, so this appearance on "Song Association" was right on time for the singer. But did Tasia have what it takes to dethrone the reigning queen Lizzo?

Before the game even started, Fantasia had us at hello and we said hi when she sang a snippet of Shai's "If I Ever Fall In Love" and even got some participation from the ELLE Mass Choir on set. Next, she explained the "Song Association" rules like previous players have, made sure to plug her album and tour and took viewers to church with a little "Amazing Grace" channeling her inner Aretha Franklin. Tasia gave us a show before the showdown! It was soon game-on, though, and she stayed in the gospel lane for the first word she was given, "yes," and sang Kurt Carr & The Kurt Carr Singers' "In The Sanctuary." She was a little thrown by the word "funny" but rebounded with enough time on the clock to sing Bing Crosby's jazz standard "My Funny Valentine." She soon got tripped up with the word "phone," however, and despite some off-camera help wasn't able to sing her own song "PTSD" in time but treated us to a few bars nonetheless. More words and songs followed and Tasia had us bopping to her brief versions of Mary J. Blige's "I'm Goin' Down," Anita Baker's "Sweet Love," Aretha's "Think" and LSG's "My Body." For the word "talk" she gave us a two-fer with Tevin Campbell's "Can We Talk" and Jodeci's "Come And Talk To Me." The word "dream" led her to sing Aerosmith's "Dream On" and share how she wants to record that song one day, which we definitely need her to do after hearing her go off here. Sprinkled in between were a few more of her songs to round things out.

By the time all was sung and done, Fantasia got a score of 13 out of 15. It wasn't enough to beat Lizzo's high score, but she didn't do too shabby either. One thing's for sure, Tasia could sing the alphabet, the phone book or a list of numbers and we'd listen to that voice all day, every day.