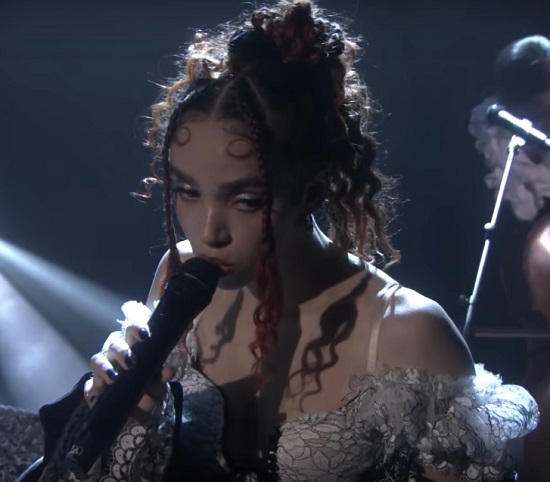 Say what you will about FKA twigs but you cannot deny that she is a fantastic performer. The singer is in promotion mode for her upcoming album Magdalene, which drops this Friday, and she's pulling no punches in getting folks ready for what's to come. In that spirit, she stopped by The Tonight Show Starting Jimmy Fallon to give a stirring performance of her single "Cellophane" for the late-night audience.

The beginning of the performance found FKA twigs sitting atop a grand piano as the opening notes of the quiet, vulnerable song played. Her body appeared to be almost swallowed in patterned fabric as she sang amid the dimmed lights of the stage — a dramatic yet effective way to bring the audience into the song's mood. She soon shed a few layers of fabric as she took to a pole mounted on stage. It was there that she recreated the acrobatic choreography of the music video, spinning and whirling around like a beautiful piece of performance art come to life. She ended the performance by spiraling back down to earth before the lights dimmed even darker and the last piano notes wafted through the air.

FKA twigs has released a couple other songs and videos from Magdalene, namely "holy terrain" and "home with you." If this is the level she's serving with promo appearances, we can't wait to see how she interprets those for the stage. Check out her performance of "Cellophane" below and be sure to pre-order Magdalene before its release tomorrow.


TAGS:  FKA twigs, The Tonight Show Starring Jimmy Fallon
Previous: Liv Warfield Wants All Your Attention On ‘Look At Me’ Next: SoulBounce Exclusive: Micah Willis Wants To Get Closer In ‘Next 2 Me’